Steven Murphy (Doorways) showcases his second feature film in the hard hitting ‘Relentless’, where those on the periphery of society must fight for their piece of ground. Someone is going to have a very bad day.

Jake (Murphy) has just been released from a six year stretch inside, a time he has spent with only his inmates for company as his so called friends and family were prominent with their abscence during his incarceration.

Now he is out, he is supposed to keep his slate clean but the call to visit his old haunts and those associataed with them is a call he cannot ignore. Though the enviroment he has been released into is far more dangerous than the past six years. People recognise him, but they are the ones that have grown up on the streets and are now the ones pushing products.

We find out that Jake’s brother Phil has emigrated to Australia and his mother has passed away during his time incarcerated. His brother wants him to get out to Aus and work for him. He is brassic, but his brother can sort that by getting the money for a ticket to a secure location in twenty four hours.

“Just stay out of trouble for one day”.

One day, just one day that’s all, but with the racket going on outside his window he feels compelled to break up the crowd of youths harrasing a young woman by the garages. This is where he meets an old aquantance Travis (Rocci Williams) who is phishing for a workmate. He also tells of a man on the up that he is connected to, ‘the Beast’ (Brett McDermott). Crisis averted he visits the job centre and probation officer. Then it is long walks by the By-pass, before heading home to a surprise.

Jake heads to the ‘Brewhouse and Kitchen’ to meet up with old mate Terry (Dom ‘Tombstone’ Tomey) gone legit with his missus Betty (Debbie Tarrier), but some people don’t change like Blockface (Todd Von Joel, Brumville) who manages to get Jake and Terry hiding from the law. 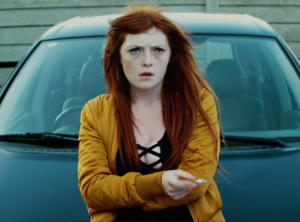 Never rains but it pours as when he gets back home the girl is in trouble again, this time by three lads, but Jake persuades them to leave. That is a mistake in Ava’s (Tiffany-Ellen Robinson, The Howling, Borstal, The Doll Master) eyes as now the beast and his lackies will be involved.

I’m no one and no one ever cared about me.

Things are going to get serious for our duo as Jake tries to secure a safe future and Ava wants what is best for her limited family. Jake shows a  vulnarable side by holding in his rage whilst trying to care for a girl with a limited future. A great second film from a director with a great independant future. As always Tiffany-Ellen Robinson shines through the grime of her character.

Combine all this action and emotion with an amazing sound track written by Maria Theresa Rodriguez (Doorways, Transcending) and you are in for a treat.

Relentless is doing the festival circuit at the moment, but watch this space for a release date.