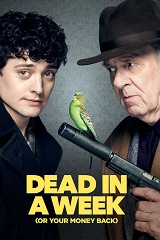 Dead In A Week (Or Your Money Back) is written and directed by Tom Edmunds and is his impressive feature length directorial debut.

The subject matter is very dark and this will most certainly not be to everyone’s taste.

“You should be careful, you could kill yourself. Can I watch?” 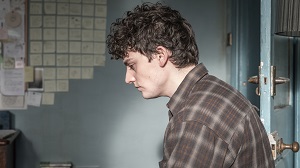 William (Aneurin Barnard – Dunkirk, The White Queen) is a struggling author, forced to work as a lifeguard at his local leisure centre to make ends meet. His book is constantly rejected by publishers, criticized for its over complicated and morbid subject matter, methods of committing suicide.

Unhappy with his life and questioning his existence, for quite a while William has been attempting to kill himself, with very little success, as he has terrible luck. 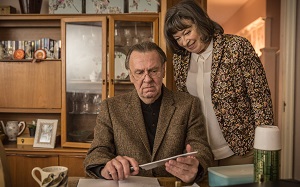 His latest idea is to throw himself from a bridge and it is here that he first meets aging assassin Leslie (Tom Wilkinson – Burden, Snowdon) who gives him his card. Having spectacularly failed yet again, he takes the decision to outsource his death to Leslie. To this end he signs a contract and waits for the deed to be done. 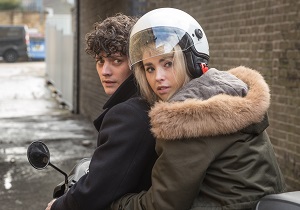 Unfortunately for all concerned, in the meantime he discovers a reason to live in the form of Ellie (Freya Mavor – Sunshine On Leith), however Leslie needs this contract. He is one short on his quota and boss Harvey (Christopher Eccleston – Doctor Who, Shallow Grave) is just looking for an excuse to force him to retire, as is his wife Penny (Marion Bailey – Mr. Turner) who wants to go on a cruise. Can William survive the week? 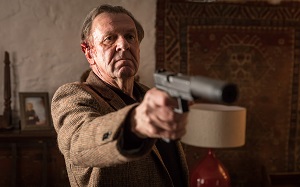 Dead In A Week (Or Your Money Back) is an excellent premise for a film which is pretty well executed with some very good acting performances. It’s a topic which could easily not be funny, but in this case they have managed to make it hilarious. There are a few issues, it lacks tension and the pacing is a bit off in places but, in true British tradition, overall this is an enjoyable film and well worth a watch.

“William, you see my predicament. One of my lifeguards is suicidal, that’s hardly reassuring.”

Dead In A Week (Or Your Money Back) is available to buy now on iTunes and Google Play.