4 stars of hilarious, foul mouthed fun in the sun. 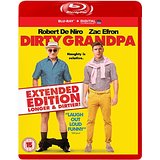 Dirty Grandpa is written by John Phillips (Bad Santa 2) and directed by Dan Mazer (I Give It A Year, Da Ali G Show).

Jason Kelly (Zac Efron – We Are Your Friends, High School Musical) is an uptight young lawyer, due to marry Meredith (Julianne Hough – Rock of Ages) the daughter of the owner of the firm he works for in a week’s time.

The film opens at the funeral of his Grandmother, after which his Grandpa Dick Kelly (Robert De Niro – Limitless, Silver Linings Playbook), a retired Army veteran, requests that he drive him to Boca for his annual golf game. Jason is reluctant but eventually agrees, on the condition that they are back in time for his wedding rehearsal. 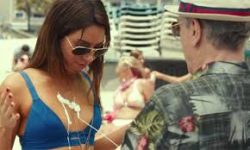 Driving Meredith’s hideous pink car they set off, but it isn’t long before things start to go wrong. Outsider a diner they bump into Shadia (Zoey Deutch – Beautiful Creatures, Vampire Academy), a former classmate of Jason’s from his time at photography school and Lenore (Aubrey Plaza – Safety Not Guaranteed), her nymphomaniac friend.

They invite them to join them going to Daytona Beach for Spring Break but Jason refuses, saying he wants to go to Boca. However, after Dick explains his reasons for wanting to go, he reluctantly agrees and their adventures and his education begin. 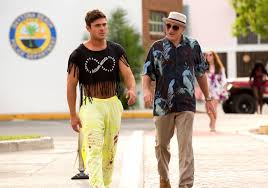 There are many mishaps along the way, jail time, unfortunate outfits and a fantastic performance from the two cops, Officer Finch (Mo Collins – Parks and Recreation) and Officer Rieter (Henry Zebrowski – Heroes Reborn), who Jason keeps encountering.

Although Dirty Grandpa is a fifteen certificate film, it is not for the faint hearted or the easily offended. 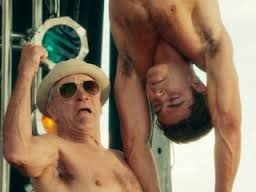 The language throughout is absolutely filthy, which I personally found hilarious, especially coming from Robert De Niro, however I suspect this will be an opinion many people will not share. There is also a lot of nudity and strong sexual references.

Zac Efron has mastered the startled and disgusted expression perfectly in this film and he has to use it a lot.

A thoroughly entertaining road trip, buddy movie with a difference, I would recommend this for people with a high tolerance for swearing in films!

Dirty Grandpa is available to buy now on DVD and Extended Edition Blu-ray.