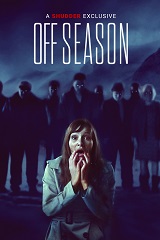 Offseason is a 2021 independent film by writer and director Mickey Keating (Pod, Carnage Park). It is a Shudder exclusive and will be available on the streaming service from 10th June 2022.

“At some point you just have to accept your nightmares and know they’re part of you, like family, like an old friend.” 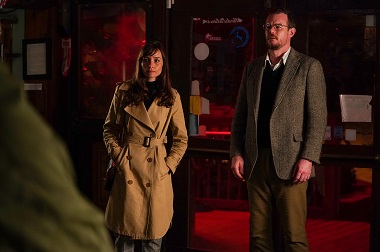 When she recieves a letter from the cemetary caretaker on the Florida island of Lone Palm Beach to tell her that her mother’s grave has been vandalised, she calls friend George (Joe Swanberg – White Reindeer, You’re Next). They hop in the car and make the long drive to the island.

When they arrive, they are informed by a sinister chap (Richard Brake – 3 From Hell, Water for Elephants) that the drawbridge is about to be lifted, closing off the island from the rest of the world until tourist season comes around again. 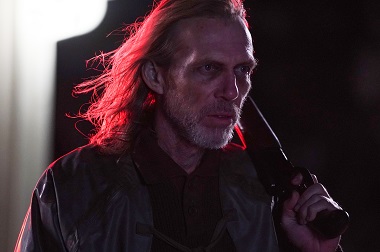 Plagued by storms, the island is not a safe place to be in winter. They beg to be allowed in to tend to the grave and eventully he relents.

Once in town, they can find no trace of the elusive caretaker and a trip to local restaurant the Sandtrap proves no help either, the people are all acting very strangely and are very unwelcoming. The only exception is a fisherman (Jeremy Gardner – The Battery, After Midnight) who seems to want to help but won’t tell her who desecrated the grave. 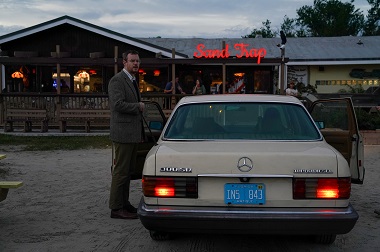 Wracked with guilt at allowing her mother to be buried here against her wishes and with the bridge about to close, trapping them on the island, Marie must work out what is happening in this strange out of season community. 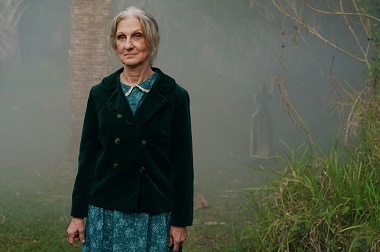 Offseason is a very enjoyable film. It won’t appeal to people who rely on jump scares and gore for their kicks, it’s much more sublte than that. This is more Lovecratian in it’s style, a slow burning sense of creeping dread and impending doom winding it’s way towards the inevitable conclusion.

Although it doesn’t bring anything new to the party, it’s well written and acted and the soundtrack is brilliant, complete with all manner of strange noises to make you look over your shoulder. 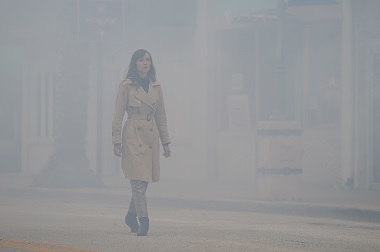 The location is also great, making full use of the fact that there are few places creepier than out of season holiday resorts.

The ending is perhaps a little disappointing, but overall this is a great watch, especially for fans of survival horror franchise Silent Hill, who will find this premise very familiar. Well worth a watch.

“In this place, the people here are my fingers, the island is the palm of my hand. In life they have free will but in death they belong to me.”

Offseason is available to stream now on Shudder.