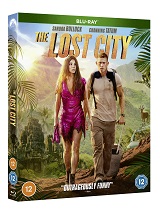 The Lost City is a 2022 American comedy film, based on a story written by Seth Gordon (Pixels). It features a screenplay by Oren Uziel (22 Jump Street) and Dana Fox (Cruella), as well as Aaron Nee and Adam Nee (Band of Robbers), who also direct.

It is available in the UK from 25th July 2022 courtesy of Paramount Home Entertainment.

“Why are you so handsome?

“My father was a weatherman.” 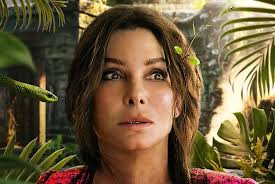 Loretta Sage (Sandra Bullock – Miss Congeniality, Demonlition Man) is a best selling Romance novelist who has become somewhat reclusive since the passing of her archaeologist husband.

Her agent Beth (Da’Vine Joy Randolph – The Last Shift) keeps on her back to finish her latest book “The Lost City of D” and once it’s done, she is roped into a book tour. Much to her annoyance, she is forced to share the stage with Alan (Channing Tatum – Logan Lucky, Jupiter Ascending), the handsome but self centred model who portrays Dash on her book covers. 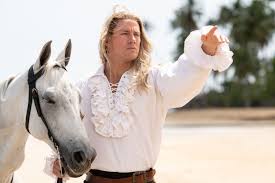 After a disatrous stage appearance, Loretta heads to her car, only to discover that she has been kidnapped. The cuplrit is Abigail Fairfax (Daniel Radcliffe – Escape from Pretoria, Now You See Me 2), an eccentric billionaire who has realised that her book was based on actual research conducted with her late husband. 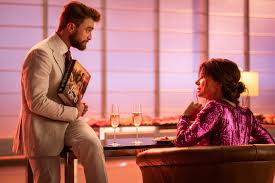 He has located the Lost City on a remote island but needs Loretta to decipher the final clue to the whereabouts of the treasure. Alan enlists the help of his former trainer Jack (Brad Pitt – 12 Monkeys, Meet Joe Black) and together they head off to mount a rescue mission, closely followed by Beth. Can a romance novelist and a cover model really survive together in the jungle for long enough to be rescued?

“His brains are in my mouth! I can taste his thoughts.”

The Lost City is a very entertaining film, perfect viewing for an overly hot summers evening. It features an amazing cast who seem to be having a great time making this tongue in cheek homage to the adventure films of the eighties.

Seeing Sandra Bullock in a pink glitter onesie and Channing Tatum in a long flowing wig makes everything worthwhile. 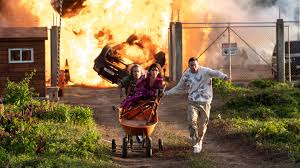 While not bringing anything really new to the table, the sincere and goofy relationships and the likeable nature of the characters make this a thoroughly charming romantic romp through the jungle. Couple that with lots of hilarious one liners and you are onto a winner.

Grab a box of popcorn and a glass of wine and settle in for an evening of fun.