Director/co-writer Aj Singh (We Are Soldier) has brought us a great film that gives its cast a chance to show off their burgeoning talents as well as his growing talent of martial artist, photographer, fight choreographer, cinematographer and stills photographer.

Monica (Stephanie Riviere) is sick of her boyfriend’s behaviour. Her bags are packed and  the taxi is ordered. She loads her bags up as Alfie (Jon Baillie, the writer(story)) stirs himself from his slumber on the couch. He drinks stale beer but turns up his nose at the cold curry. Monica has left him a note saying they need to meet in the pub and talk things over.

Alfie knows his life is going down the wrong road and

he wants to turn things around, but he is skint and in debt with loan sharks. Jason (Jason Rodella) wants his money back and his heavy, Shaun (Shaun Symonds) makes it clear that his fingers are in grave danger if he takes to long to get their money. Alfie recognises the other heavy as copper Marcel (Marcel Melito who advises him to be prudent on the payment.

When he finds out that Monica has met someone else while abroad, Alfie does what Alfie does, he phones an escort agency for a French girl, but what he gets is a Eastern European girl, much to his dismay, which leads him to getting in trouble with a Eastern European gang and also villain Harry (Vic Waghorn, Broadchurch).

Alfie hears on the radio that little girl Issabelle Adams (Lea Riviere) is missing and the reward for her return has been raised.

How will Alfie sort his life out as he tries to get even with the guys that beat him up and dump him in the street?

With his martial arts background can he win a gunfight against Dmitry (Mark Sears, We Are Soldier)?

This film is a great way to spend 43 minutes of your time, but for the meantime, you’ll have to watch this space for release details. 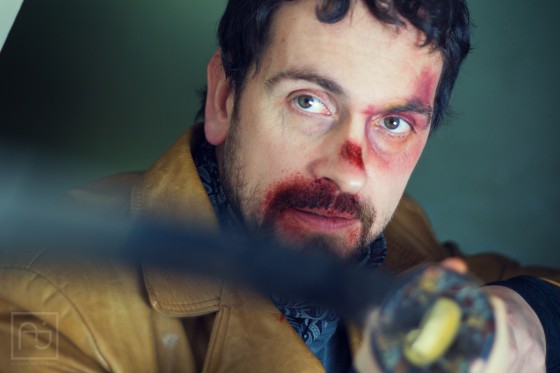