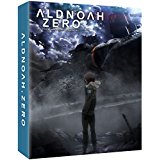 Sworn Enemies and a Princess.

From the great A-1 Pictures (Sword Art Online, Sword Art Online II, World Conquest: Zvezda Plot, Magi: The Kingdom of Magic) comes season 2 of the fantastic Sci-Fi series that blew us away with the first edition of this Mech vs Martian extravaganza.

Set 19 months after the encounter between Slaine and the Princess Asseylum and Inaho. Where Slaine tried to kill them both as well as the Martian Lord Saazbaum. Fearing their capture Slaine offers Saazbaum a way out in his Tharsis Kataphract. On that day the Princess went missing and Inaho was left for dead as Slaine had shot him in the

eye, but somehow he survived and now supports an analytical eye. He can use this to tell if someone is lying or the way the gravity fluctuates whilst firing his Kataphracts gun either on land or space.

He does this when the Martian Frozen Elysium

Kataphract attacks the Deucalion using its special power of completely freezing everything in a 1Km diameter. All Kataphracts are frozen where they stand, but Inaho turns up in his restored KG-6 Sleipnir, the training mech he prefers. His eye works out why his shell aren’t landing and uses an air burst round to break through the ice field and bring the Kataphract down. 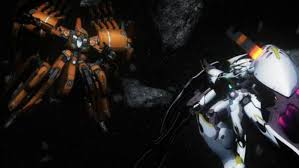 The Martians are making their advances through North and South America due to the support of Princess Asseylum who makes rallying calls from Lord Saazbaum’s Landing Castle. Much to the disgust of the other Martian Lords Saazbaum has made Slaine a Knight of VERS and he pilots his Tharsis Kataphract that can see into the future.

The Martians and the humans now have bases within the debris field that came from the partial destruction of the moon, and the Deucalion and her young crew are sent there to help with the upcoming battle with the Martian space base as they are to pass close enough to see each other. Trident and the Marineros Base come closer and both sides deploy their Kataphracts and they find it hard to hit each other in the fluctuating gravities of the debris field until Slaine and Inaho take to the darkness of space. 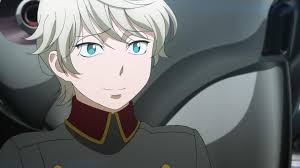 The two of them trade rounds and each is baffled by the others ability to doge their bullets, until they realise who the other is. They believe the other dead but it cannot be mistaken that they are who they are. Sworn enemies.

Can Earth and the Martians ever be at peace with the Princess turning on her Terran friends or will the Martians defeat the UFE and drain Earth of all its valuable resources? The battle continues.

A great conclusion to a brilliant start, this is for the lovers of Sci-Fi and big Mechs fighting in space. 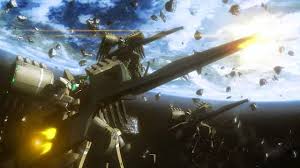