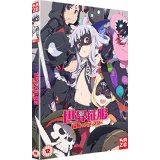 A-1 Pictures (Fairy Tail, Magi: The Kingdom of Magic) brings us a series about Middle school heroes and villains and a small girl bent on World Conquest. With their usual style of good animation and great characters created by Kouhaku Kuroboshi and Keigo Sasaki this is great fun as well as dealing with social and political subjects.

Udogawa, Japan is under Level 2 Martial Law, it is late and Asuta Jimon

(Natsuki Hanae, Ben-To, The Devil is a Part-Timer!, A Certain Scientific Railgun S, Tokyo Ghoul, Sword Art Online II) is starving, because he has runaway from home due to his father’s indifference. He is cheered up when his school friend Renge Komadori

(M.A.O, Sword Art Online II) comes out of a store and he tries to flirt with her to get a roof over his head, but she fobs him off and makes her way merrily home. Just then the curfew siren sounds and all the shutters on the shops come down. With his stomach rumbling he pleads for some food and manages to scrape enough coins together to get two steamed buns. 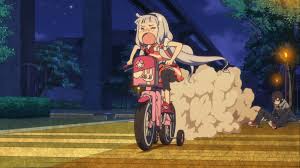 He skulks off around the back of the shops to eat his meagre meal, but just then there is a collision between a small pink bicycle with stabilisers on and a small white haired girl on the floor. He gets a smack in the face for helping the girl up. She then spies his food and pleads hunger and the kind hearted Asuta offers her the choice of bun but she grabs both and stuffs them in her mouth. Then tells Asuta,

Then there is a large explosion and a humongous tentacled monster in the background. The young girl is Kate Hoshimiya (Misaki Kuno, Noragami) and 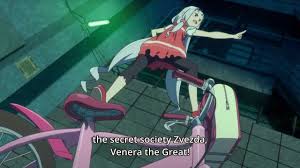 she starts mumbling about “the wrong time”. She tells Asuta that if he pledges his life to her and her quest he will have a roof over his head and food in his belly. What is a young hungry boy to do? He pledges his fealty to Kate and to her alter ego Lady Venera the leader of the secret society Zvezda, the group bent on Lady Venera seeing her dreams come to fruition. When done he finds out that she had food in her backpack all along, along with a gas mask which she gives him and tells him he will need it, just as the sounds of tank fire and the sound of attack helicopters fill the night air.

After all the fuss has died down Kate takes the still doubtful Asuta back to their secret HQ. Here he meets technical whiz Natalia “Natasha” Vasylchenko (Kana Hanazawa, Deadman Wonderland, Magi: The Labyrinth of Magic, Space Dandy) and lounge-about Yasubee “Yasu” Morozumi (Kõsuke Toriumi, Bleach, Knights of Sidonia). Also around 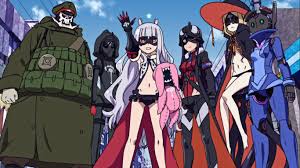 the table is Goro Shikabane (Minoru Hirota). In the kitchen is Itsuka Shikabane (Mariya Ise, Fairy Tail) and the weirdest of them all is Roboko (Erii Yamazaki). But these members of Zvezda all have alter egos, they can transform into their fighting forms and they have an a.k.a. These are, in order, Professor Um, Odin, General Pepel, Lady Plamya  and now Asuta has one as well, Dva.

Lady Venera was looking for her lost stuffed toy Galaktika which Asuta managed to recover during the skirmish earlier and it is Kate’s favourite possession, mainly because it isn’t just a stuffed toy. 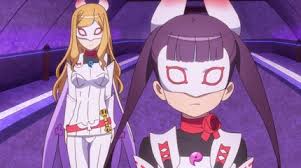 Every Secret Society bent on World Conquest will always have an arch enemy and Zvezda is no different.

Step in White Light who tirelessly hunts for those who wish to do harm to West Udogama Their agents are two young girls, Renge Komadori (Mao Ichimichi, Magical Warfare) aka White Robin with Miki Shirasagi (Minako Koto, Tiger and Bunny) and the older most revered Kaori Hayabusa (Maaya Sakamoto, Naruto), White Falcon. 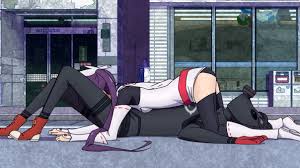 There are many facets to World Conquest and with episode titles such as, “Conquer All Humanity”, “From The Dinner Table to The Graveyard”, “White Robin in Danger”, “The Falcon Has Landed”, “Not So Quiet on the West Udogawa Front” and “All That Remains After the Conqueror’s Dreams”, you are in for a roller-coaster ride with this series.

There are prophecies to fulfil, ancient ruins and over zealous political figures, all thrust together with teenage angst and the determination of a leader who will stop at nothing to get to her pinnacle. For a boy that can’t fight but can cook, life in a secret society will not be easy.

Can dreams come true, can friends pull together or will the man destroy it all?

Just don’t be a smoker!

“I am Lady Plamya, known to Incinerate wayward children!”