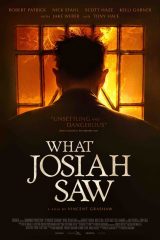 What Josiah Saw is a 2022 American horror film written by Robert Alan Dilts and is the third feature for Vincent Grashaw (Cold Water, And Then I Go). It is a Shudder original film which has enjoyed great success on the festival circuit.

Filmed against the stark backdrop of Oklahoma, this tale of a deeply damaged and dysfunctional family is very well imagined and acted.

“Saw the damndest thing this morning. Can’t shake it. It’s difficult, ‘cos of the magical nature of it.”

Split into four chapters, the film opens with Thomas Graham (Scott Haze – Jurassic World Dominion), a mentally disturbed and browbeaten young man, living on a remote farmhouse with his overbearing and abusive father Josiah Graham (Robert Patrick – Honest Thief, No Man of God). Josiah is a hulking figure of a man, brooding in dirty windows and drinking whiskey for breakfast. 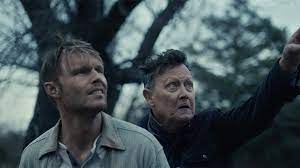 Meanwhile, representatives from a large oil corporation approach the town mayor for his assistance in purchasing the land surrounding the town. You don’t want to go near the Graham property he says, nothing good ever happens there. The wife hanged herself and the son has never been the same and neither have the twins who moved away. 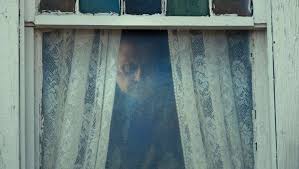 Following an epiphany, Josiah announces to Thomas that his mother burns in hell and they must repent and sort out the farmhouse in preparation for the return of the twins Eli (Nick Stahl – Sin City, Terminator 3: Rise of the Machines) and Mary (Kelli Garner – Americana, Pan Am) who have also recieved letters from the oil company.

Chapter 2 introduces us to Eli, an ex-convict struggling to stay afloat in a world of drugs and gambling. He has got himself into trouble with local heavy Boone (Jake Weber – Meet Joe Black, U-571) and really needs some money. 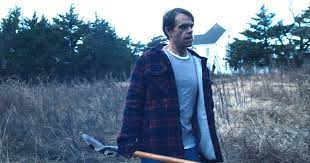 Chapter 3 reveals Mary, trying to fit in with polite society while desperately attempting to be accepted as an adoptive parent with her husband Ross (Tony Hale – The Heat, Night Owls).

Chapter 4 sees the harrowing conclusion as the siblings reunite at their childhood home and devastating secrets are revealed.

“Did you just toss smack on my desk?”

What Josiah Saw is a very clever story, made by the extraordinary performances of its stars. Robert Patrick sells his brutal character brilliantly, while Nick Stahl is unrecognisable as the drug ravaged Eli.

It is certainly not shy of addressing sensitive issues head-on, with its themes of child abuse, racism, and persecution across all walks of life. Unfortunately, while excellent, it is far longer than it needs to be, meandering to it’s admittedly horrifying conclusion.

It is also relentlessly grim, so much so that you feel almost numb by the time it gets to the end. It’s almost as if the director had to include absolutely every imaginable atrocity in one film, maybe a little over the top.

All that aside however this is certainly worth watching and will probably make you feel uncomfortable for a while afterwards.

“She say, that we gotta right our ways and she’s gonna send somebody to guide us, but he’s going to come to me and me only.”

What Josiah Saw is available to stream on Shudder from 4th August 2022.