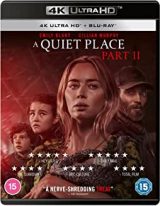 Talk about putting your money where your mouth is… producer, writer, director and actor John Krasinski (Shrek the Third, The Office (TV Series)) brings us the second instalment in his Horror/Sci-Fi silent scare fest. This, the second instalment (the first is a must-watch) of the alien invasion, where if you make a sound you are dead. Based on the characters created by writing partners Bryan Woods (The Bride Wore Blood) and Scott Beck (University Heights).

Small town America and Lee Abbott (John Krasinski ) has just finished work, and now he is on a shopping mission at the local store as the owner is watching a news report about the chaos in Shanghai where something has dropped from the sky. But Lee has a more important thing on his mind, his son’s little league baseball game, where his wife Evelyn (Emily Blunt, The Adjustment Bureau, Edge of Tomorrow) and

his children Regan (Millicent Simmonds, Wonderstruck, A Quiet Place), Marcus (Noah Jupe, The Man with the Iron Heart, Honey Boy) and Beau (Dean Woodward) are waiting. Marcus is about to take the bat, on the bleachers is his friend Emmett (Cillian Murphy, The Dark Knight, Peaky Blinders (TV Series)) who still doesn’t know how to do Regan’s sign language.

Suburban life feels good, until boom, something distracts Marcus as he is about to swing his bat. The match is abandoned, and people head for their cars and trucks Evelyn takes Marcus and Beau, while Regan goes with her dad.

aliens that, by sound alone, any noise means attack and death. Now Evelyn and Lee have to survive this onslaught as their scary ordeal overlaps as bodies fly left and right. Lee and Regan take refuge in Reagan’s Drop Inn, where others are cowering in fear. As the Alien searches for its prey. This is the time that you do not want your phone to ring…D’Oh

But now it is day Four-hundred and Seventy-four, and we are at the end of the first film. 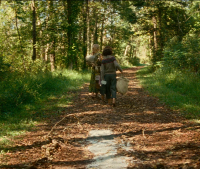 Evelyn and Marcus and her newborn must leave their flooded, burning farmstead, and look for help in the surrounding farms that have been lighting signal fires on top of their silos each night. They must leave their well laid out paths of soft, silent white sand and run the gauntlet of nature in bare feet. Watch where you step and keep it quiet. They have one thing in their favour, they know the aliens have a weakness, and Regan wants to make the most of it. 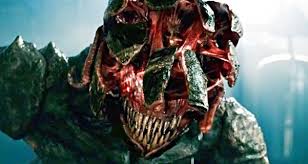 A quiet Place, Part II is a great follow on from the first film and both are worth setting aside the time to watch them, as we eagerly await the third film.

You will feel the effort of every movement. Is there such a thing as a safe haven?