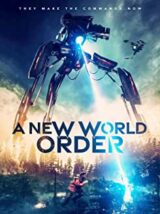 Silence is Golden, to Speak is to Err.

German writer/director Daniel Raboldt (Spam Attack: The Movie (Short), Furple Reign (Short)) brings us his first full length Sci-Fi feature, and what a feature. Crowd funded, he managed to raise €12,000, and he has put that money to great use.

A New World Order is by-in-far the best Sci-Fi film that has been released in many a year. A unique idea that sees no dialogue between the two characters in this film, which leads the characters to be very expressive with their body language. The special effects are as good as any Hollywood Sci-Fi film out there. The tension that Raboldt creates is so palpable you will be holding your breath and keeping schtum throughout this feature.

A long road, a single vehicle, a lone man. The man has had a rough time as he is bloodied, and his hand is bandaged, there are trees all around, he pulls over as he spotted something, a log cabin. It is quiet, and it needs to be, as our guy (Stefan Ebel) is on the run from the front lines of a war that humans are losing.

He takes the risk as he grabs his laser rifle and scopes the house out before sneaking towards the house. He checks the doors, they are locked, but Tomasz is a clever man and manages to find the key and makes his way

In these trying times, people have their own coping mechanisms and Tomasz’s is hard drugs, which he indulges in when he feels safe. These drugs give him hallucinations of his time on the front line, also how all this came to pass. It was all down to Dr Carnap (Nikolai Will, White Pillow, Sex & Crime) who upgraded the Mark 7 rescue robot which lead to them turning against us and their hunting method is human voices, hence the complete silence from the start of the film. 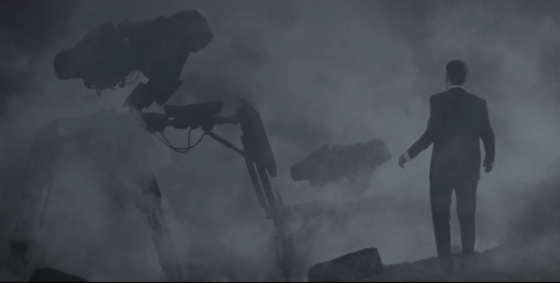 After he comes round he updates his maps, as the robots are  advancing. When he wakes in the morning, he is shocked to find that his barrier isn’t working, he spots one of the stakes has been moved, nervously he retrieves it. Replacing it, he turns the barrier on again, but it goes off again, as he studies it a figure out of the woods appears and knocks him out. The figure was a woman who is hell-bent on destroying the robots, she has been fighting with the resistance, and this house was her base of operations.

Now does anybody trust anybody any more? You’ll just have to watch it and see because if they ask any questions they are dead!

A New World Order gives me the feeling of War of the Worlds when you are stuck in a cellar with Harlan Ogilvy. You never know which way it will go.

All the options are deadly.

A new World Order (aka A living Dog) is an eye-opening experience that will have you cowering in the corner of your settee.

A New World Order is available on DVD and Amazon Prime