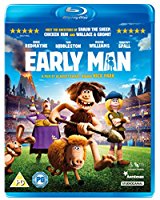 “I have been massaged by a pig!”

As the film opens we see a catastrophic asteroid impact, wiping out all the dinosaurs on Earth, but miraculously sparing a small group of cavemen, protected by a valley. Finding a chunk of asteroid, they begin to kick it around, thus inventing football. 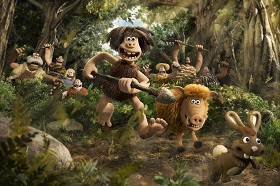 Many years later, in the Stone Age, there is still a tribe living in the valley, led by Chief Bobnar (Timothy Spall – Mr. Turner, The Enfield Haunting) All seems well and they live quite happily hunting rabbits. 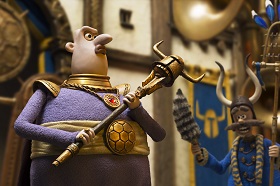 One day however their peaceful existence is shattered by the arrival of bronze obsessed Lord Nooth (Tom Hiddleston – Thor: Ragnarok), who invades the valley with his army of war elephants, driving out the tribe and proclaiming that the Stone Age is over and the Bronze Age has begun.

Brave tribe member Dug (Eddie Redmayne – Fantastic Beasts and Where to Find Them, Jupiter Ascending) tries to attack them but falls into a cart and is taken to the city. Mistaken for a player, he finds himself on the pitch at a football match. He takes the opportunity to challenge the city team to a match, the prize being the valley.

Unfortunately, his tribe have no idea how to play, but with the help of his pig sidekick Hognob (Nick Park) he is determined to succeed. He meets Goona (Maisie Williams – Game of Thrones, iBoy), who was refused entry to the football team because she’s a girl and eagerly agrees to train the tribe and help them take back their valley. 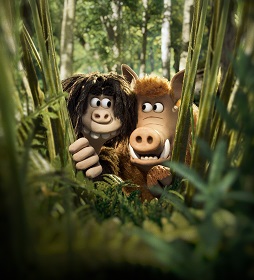 Early Man is a hilarious film. I was a little daunted at the football aspect of it, however I didn’t find that it detracted at all. The puns are brilliant and easy to understand, even for someone like me who knows nothing about football. As ever, the stop animation is fantastic, a real achievement and a mind boggling amount of work. The voice acting is great too, really bringing this story to life.

A brilliant film, with something for everyone and well worth adding to your collection.

“Beating him with sausages? Shame on you! That’s a definite penalty!”

Early Man is available to buy now on DVD, Blu-Ray and 4K UHD