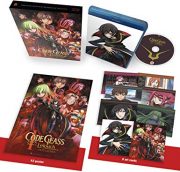 From Sunrise (The Boy and the Beast., Mobile Suit Gundam Thunderbolt, Wing) animation house comes one of the most critically acclaimed anime series. The tale of a young man with aspirations of World domination to bring peace to the Planet. But at the moment he is hindered by being exiled from his country and is a prisoner along with his sister in the area formerly named Japan.

The story follows Lelouch vi Britannia, a prince who was exiled along with his sister Nunnelly by the King, to Japan as prisoners. The Britannian’s are a warring nation and seven years later they have conquered Japan and made it their Area 11, denying the natives any form of identity. During the occupation Lelouch and Nunnelly manage to fake their deaths and then he is trapped inside a rebel transporter along with rebels who have stolen a large cannister of poison gas.

During the pursuit Lelouch comes into contact with an old friend, Suzaku Kururugi, but he

is on the side of the military. Before the canister is recovered it opens revealing a girl with long green hair. The commander sees their secret being revealed so he orders Suzaku to kill all the witnesses but he refuses and he is shot for his insubordination, while Lelouch and the girl try to make their escape. They are

cornered and surely  going to die. The girl C.C. turns to Lelouch and gives him the power of the Geass, the ability to command anyone in eye contact with him to do exactly what he tells them.

He commands them to kill themselves which they promptly do.

Lelouch is driven to find the killer of his mother Marianne vi Britannia, he suspects his family members but it will take time to work that one out.

There are many rebels factions fighting the Britannians and with his new power Lelouch takes on the persona of Zero, a masked leader trying to get all the rebels to join him to take the fight directly to the occupiers.

Definitely one for the fans of the series. 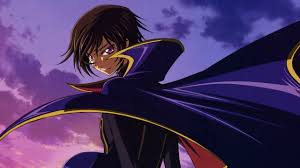 Code Geass: Lelouch of the Rebellion 1, 2 and 3 are available as collectors editions now.