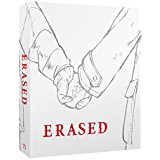 Erased is based on the seinen manga series written and illustrated by Kei Sanbe. It was adapted to anime by A-1 Pictures (Sword Art Online, Your Lie In April) and directed by Tomohiko Ito (Silver Spoon). This release features the first six episodes of the anime.

“I’m scared to dig too deep into myself…”

Set in the year 2006, Erased tells the story of Satoru Fujinuma (Benjamin Diskin – Digimon Fusion, Star Wars: The Clone Wars), a 29-year-old manga artist who occasionally experiences a phenomenon he refers to as “Revival”, in which he is sent back in time by a few seconds, allowing him to perform life-saving feats. 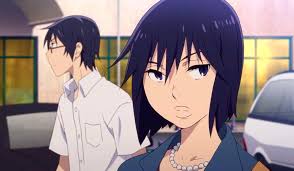 He uses this to save a boy from a runaway truck, whose driver had died from a heart attack, though becomes hospitalized for a few days as a result. As his co-worker, Airi Katagiri (Cherami Leigh – Coppelion), praises Satoru for his life-saving efforts, Satoru is visited by his mother, Sachiko (Sara Cravens), who wants to help in his recovery. 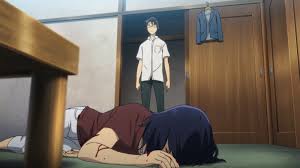 She reminds him of an incident 18 years ago in which an adult named Jun Shiratori (Max Mittelman – Magi: The Labyrinth of Magic), who Satoru had trusted, was arrested for the kidnapping and murder of some of his classmates. The next day, as Satoru experiences another Revival phenomenon, Sachiko takes note of a man who seemed to be trying to kidnap a child. Looking into the matter, Sachiko deduces that the man was the true killer from 18 years ago, but before she can inform Satoru, she is killed in Satoru’s home. Just as Satoru discovers Sachiko’s body and is accused of killing her, his Revival sends him all the way back to 1988, when he was still an 11-year-old elementary school student. 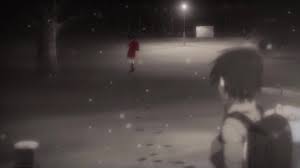 He quickly realises that he must prevent the kidnappings and murders if he is to save his mother in the future. To this end, he begins a quest to befriend his troubled classmate Kayo (Stephanie Sheh – Eureka Seven: AO, Eden of the East), the first victim. She spends all her time alone, due to her difficult home life and he realises that if can stay with her on the night he saw her alone in the park just before she disappeared, he may be able to change the future and save his mother’s life. 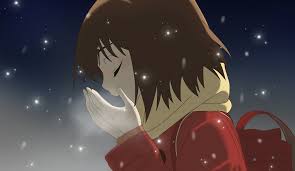 Erased is extremely well written and is a very interesting story. The characters are well developed and I especially enjoy the way the bad guys are portrayed, slow motion and with glowing red eyes, melodramatic but effective. The animation is truly beautiful, especially the christmas tree scene and enhances the story no end.

This one is a must watch for fans of murder mysteries, packed with suspense and will have you on the edge of your seat. I can’t wait for the second half of the series.

“I remember moments like this. I guess back then I didn’t realise how important they’d be. I let times like this slip by, not even thinking about them.”

Erased is available to buy now on Collector’s Edition Blu-ray.