4 stars for this classic anime film. 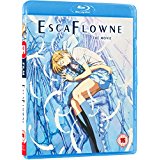 Escaflowne The Movie is a re-telling of the hugely popular television series The Vision of Escaflowne. It is directed by Kazuki Akane (Geneshaft) and produced by Studio Bones (Eureka Seven: Astral Ocean, Fullmetal Alchemist). This edition features the original Japanese soundtrack as well as the original English dub and the 2016 Kickstarter English dub.

“Oh no! I’m completely drenched! I do hate the rain. It makes me so depressed! 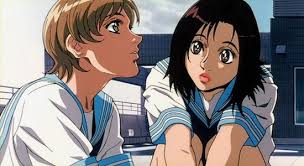 It tells the story of Hitomi Kanzaki, a teenage schoolgirl who is struggling with depression. She feels her life has no direction and wants nothing more than to disappear. Despite the efforts of her best friend, they fall out and while alone at the stadium she is approached by a mysterious stranger.

This stranger is Folken of the Black Dragon Clan and he summons her to another world, called Gaea, where she is believed to be the Wing Goddess, said to be able to save or destroy Gaea using the legendary Dragon Armour.

She awakens to find herself inside a suit of Dragon armour, named Escaflowne. After climbing out, the armour turns into a pink stone and flies up into the sky and she is attacked by King Van, who believes she has made the armour disappear.

In King Van, she finds a kindred spirit and together they hold the destiny of both each other and Gaea in their hands. 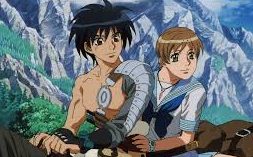 Escaflowne is certainly an impressive film. The animation is beautiful and although it was made in 2000 it doesn’t feel dated. The soundtrack is lovely too and adds to the atmosphere. The story is also really good, quite different from the series which gave it birth but by no means disappointing.

A classic anime and well worth adding to your collection.

“I too am alone. It’s sad being alone. It’s painful. I felt that way too. But if we’re together, at times we may hurt each other, and we may even part. But, that is not the end. I’ll always be with you.”