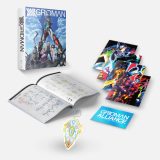 A Petulant Teen Playing with Kaiju.

From the anime house that brought us Kill La Kill,  Studio Trigger now brings us the adaptation of the 1993–1994 tokusatsu series Denkou Choujin Gridman with up-to-date slick animation and plenty of destruction, as Kaiju wreak havoc across the city.

The fictional Japanese city of Tsutsujidai and Yūta Hibiki (Brandon McInnis, Attack on Titan, The Heroic Legend of Arslan: Dust Storm Dance) is a part of class 1 – E, but at the moment he is in his classmates house. Rikka Takarada (Jill Harris, Tokyo Ghoul:re, Fairy Tail) looks down at the sleeping Yuta who lies on a couch in her mothers junk

store. When he wakes he has amnesia but what is weirder is that he can see a figure on an old computer screen, calling himself Gridman (Robert McCollum, Attack on Titan: Roar of Awakening, Assassination Classroom, Psycho-Pass) but Rikka sees nothing. Rikka is the charged with looking after him until he gets home, not a

task she relishes as this is the first time thay have really talked. Yuta also sees things in the night sky. “Kaiju!”

The next day his classmate Sho Utsumi (Greg Ayres, Dragon Ball Super, Free) collects him from home and takes him to school, he says that if Yuta doesn’t remember him they will just have to start learning to be friends again. Yuta tells him about Gridman

and Sho is intrigued and asks to see the terminal and when he sees it he names it “Junk”.

Suddenly Yuta feels something strange in his wrist and Gridman tells Yuta that danger approaches, Rikka and Sho still can’t see him. A Kaiju appears in the city and

starts destroying parts of the city including their school. As this destruction continues Yuta is sucked into Junk and Gridman appears in the city to fight the Kaiju. Rikka and Sho now have access to junk, Rikka types the stratagem that Sho comes up with to defeat the monster. Which he does when Sho spots a weakness in the Kaiju, but most of the city has been trashed.

Our three friends make their way to school only to find that there is nothing wrong with it, not a scratch, but they know that it was destroyed. Something is amiss.

As well as the school being fixed, so is the rest of the city, nobody remembers the attack and subsequent saving of the city. The trio also notice that there are several students missing from class but nobody remembers them at all. They must investigate along with the strange Samurai Calibur (Ian Sinclair, Dragon Ball Super: Broly, The Boy and the Beast) who it turns out can also be assistance to Gridman in the guise of a huge sword that Gridman can wield.

“How do you plan to fight a Kaiju that size?”

They discover the origin of the Kaiju, their classmate Akane Shinjo (Lindsay Seidel, Psycho-Pass: The Movie, Yona of the Dawn, Ben-To) and her online aid Alexis Kerib (Barry Yandell, A Certain Magical Index II, Dragon Ball Kai) are behind the appearances of the Kaiju.

“If there is Kaiju, there has to be aliens. There is always aliens.”

How can they stop Akane, Alexis and the Kaiju? Maybe with the aid of the Neon Genesis Junior High Students,  Max (Cris George, Space Dandy), Borr (Apphia Yu, Heavy Object, A Certain Scientific Railgun S) and Vit (Chris Burnett, Divine Gate) but watch out for the antsy Anti (Stephen Fu, Attack on Titan). 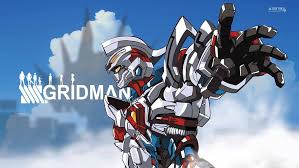