5 star blood soaked battle for the streets of Tokyo. 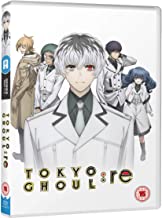 Tokyo Ghoul:re Part 1 is based on the manga sequel of the same name written by Sui Ishida. It is effectively Season 3 of the Tokyo Ghoul anime series. It is produced by Studio Pierrot (Yona of the Dawn, Twin Star Exorcists) and directed by Toshinori Watanabe (Mix: Meisei Story).

This release features episodes 1-12 and is available on Collector’s Edition Blu-ray and Standard DVD. It is the sequel to the first two series, so the usual spoiler alert applies, don’t read unless you have watched them, you have been warned!

“Well, aren’t you a tasty looking treat. This is the first time I’ve ever met a Quinx. If I got my hands on you, I’d slice your belly wide open.” 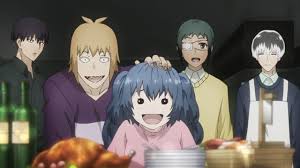 It is two years since the end of season two and the CCG attack on Anteiku. The dynamic in the city of Tokyo has changed since this new, more aggressive approach and while Aogiri Tree try to bolster their ranks, many of the ghouls have become more cautious in their dealings with humans.

By way of response, the CCG have set up a new unit, the Quinx Squad. They are humans who have been given ghoul abilities thanks to transplants and are able to employ both Quinque and Kagune as a ghoul would do. 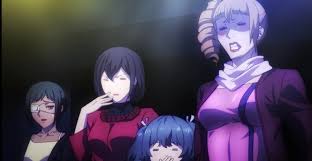 They are a mixed bunch, trained by Akira Mado (Morgan Garrett – Gonna Be the Twin Tail!!) and led by Squad Captain Kuki Urie (Adam Gibbs – Chaika – The Coffin Princess), a serious type who wants nothing more than to rise through the ranks at any cost. There’s the enthusiastic Shirazu (Daman Mills – Dragon Ball Super) who needs to raise money to cure his sister, shy but effective Toru Mutsuki (Mikaela Krantz – Noragami) and the aptly named Saiko (Sarah Wiedenheft – Grimgar of Fantasy and Ash). 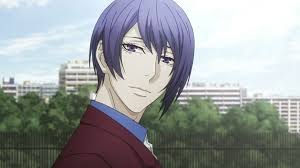 Strangest of all is their mentor and group leader/ father figure, Haise Sasaki (Austin Tindle – Snow White With the Red Hair). Protege of Kisho Arima (Christopher Wehkamp – Psycho-Pass 2), he remembers nothing from before the past two years. Fans of the franchise will no doubt note that he does look somewhat familiar, as he fights an ongoing battle with not only the ghouls but the memories of a past best left forgotten. 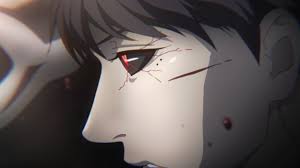 Tokyo Ghoul:re is yet another brilliant instalment in this fascinating world. Once again it is beautifully animated, dark, blood soaked and impeccably imagined. Featuring another nerve jangling soundtrack from Yutaka Yamada, it is very atmospheric and as ever, filled with twists and turns.

Fantastic and a must own for horror fans and fans of the Tokyo Ghoul franchise. 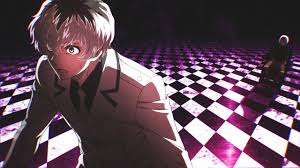