The Comic, The Man, The Legend!

Once again we have to thank The Keaton Project 2015 by Cineteca di Bologna and Cohen Film Collection to restore all Buster Keaton films between 1920 – 1928 and also Eureka The Masters of Cinema for putting together this amazing comedy classic package. These three films show off the unsurpassed physical skills of Keaton and his amazing visions through the camera lens without the use of audible dialogue.

It is always done for the love of a woman.

Tells the tale of two socialites, at a time of conflict where activists want to set adrift a newly purchased cruiser (The Navigator) bought by the unnamed enemy. Meanwhile Rollo Treadway (Buster Keaton, The General, Buster Keaton, Buster Keaton 3 Films) a wealthy fop, spots out of his window a pair of newly weds and decides,

“I think I’ll get Married. Today!”

The centre of his affection is the daughter of wealthy ship owner (one being the newly sold Navigator) Frederick Vroom, she is Betsy O’Brien (Kathryn McGuire, Sherlock Jr.). He plans to take his new bride on a cruise to Honolulu

but when she rejects him, his plans are scuppered and he decides to go on the cruise by himself, but as he isn’t capable of getting up at 10am he decides to get on the ship tonight (there is no-one on board). At the same time Betsy and her father arrive at the dock and the activists capture him. Betsy hears his cries for help and ends up on the ship alone with Rollo. Let the fun begin. Inventive and Unique.

Jimmie Shannon (Keaton) falls for Mary Jones (Ruth Dwyer, A Hero for a Night) but even seeing her all through a year he never plucks up the courage to tell her he loves her.

Jimmie is a junior partner in a firm of brokers which has been tricked into a deal that will mean financial ruin and maybe jail time and he and his partner Billy Meekin (T. Roy Barnes, It’s a Gift) don’t know what to do. Then a lawyer (Snitz Edwards, The Phantom of the Opera) turns up at the office and the pair do everything to avoid him by heading to the country club with the lawyer hot on their heels.

Eventually the lawyer gets through to them about his mission, inheritance for Jimmie and it will solve all their problems. But wait there is a clause, to inherit the fortune he must be wed by 7pm on his 27th birthd 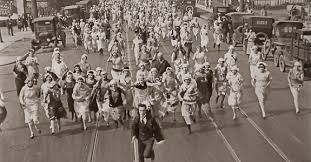 ay. No problem, when is your 27th birthday? Oh today AAAAAARGH.

Once more Keaton has to find a way to get Mary to marry him, but with a friend like Billy he is going to have a hard time of it.

With great stunts and a cast of hundreds this will slay you in the aisles.

No Keaton doesn’t play a butler, he is Alfred Butler a wealthy man whose family think he needs to man up so they pack him off to the woods to rough it and go hunting and fishing. (This takes the mickey out of Glamping). He is packed off with his trusty valet (Snitz) in their posh car and trailer out into the woods.

Once camp is set up, it is time for the pair to go hunting, but Alfred and Martin (valet) can’t see the wood for the trees, so his hunting is not succesful, but

he does bag a handkerchief of pretty mountain girl (Sally O’Neil, Jazz Heaven) who is furious with him.

Their paths cross once again

when Albert tries a cross between hunting and fishing. She rescues the drowned rat and takes him back to camp, where he offers her dinner. They hit it off and Alfred being Alfred wants to mary the girl.

But her father and brother won’t have any weaklings in their family, so Martin

comes up with a cunning plan, Alfred ‘Battling’ Butler – The Prizefighter (Francis J. McDonald, The Ten Commandments) will have a new face in Alfred, his Alfred to impress the family.

Battling Butler is the longest film and it sets up the characters before the main point of this film, but it will have you on the ropes with laughter at his genius.

All three films are atmospherically orchestrated by Robert Israel and his Orchestra. 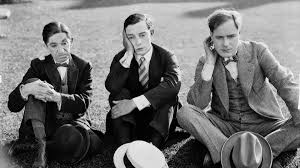