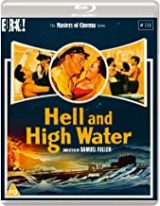 Richard Widmark at his best.

Another great release from Eureka and the Masters of Cinema range, this #216 sees this 1954 film receive the special touch that make the MoC Blu-rays a treat to watch. Written and directed by Samuel Fuller (I Shot Jesse James, Fixed Bayonets!) who takes David Hempstead‘s (Finishing School) story and takes it to the high seas, to show off the effects of CinemaScope in the tight confines of a WWII Japanese submarine.

This is the story of a nuclear explosion and how it came to be. 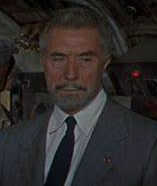 Whip back to an earlier time in 1953 when reporters from the New York Herald (Euro division) race across Paris to the D’Orly airport to get the scoop on Professor Montel (Victor Francen, Journey to the

Lost City, The Beast with Five Fingers) who is the leading expert in nuclear science. Accompanying him is his assistant Denise Gerard (Bella Darvi, The Egyptian, Sinners of Paris). They board their plane, but they never arrive at their destination, Prof. Montel is the fourth scientist to have disappeared in recent times. Who would do such a dastardly thing?

Meanwhile at a Tokyo airport, a Mr J. C. MacDougall (Richard Widmark, The Alamo, Panic in the Streets, Broken Lance, Two Rode Together, No Way Out, Twilight’s Last Gleaming) passes through the checkpoint. When someone asks him if he is Capt. Adam Jones? Nope you must be mistaken.

After meeting with Eddy and the taxi driver Eddy he arrives at the docks, where

another dodgy character lets him into a warehouse. Here he meets Hakada Fujimori (Richard Loo, The Man with the Golden Gun) who shows him a photo of Jones and Captain Taylor (now deceased) and the mission he was on when he died. It took a $5000 down payment just to get Jones to Tokyo and now they want him to do a mission for their team which includes all the missing scientist including Montel.

Look, uh, look before we go any further… exactly what country do you men represent?

We represent many countries… as private individuals. We are scientists, former statesmen, businessmen. All volunteers. Acting independently for a common cause. Against a common enemy.

Something fishy is going on in the waters of the North Pacific and Prof Montel and his assistant are going on the mission with Jones and some of his old crew (Cameron Mitchell, Gene Evans, David Wayne) on a rusty old Japanese submarine with no working torpedo tubes. Marvelous.

Hell and High Water is Richard Widmark at his best and you are pressed up against him and his crew in the damp confines of his submarine.