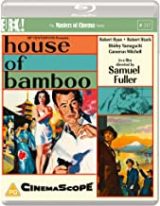 Death in the Orient.

Following his successes with Hell and High Water Samuel Fuller (Forty Guns, Fixed Bayonets) follows it up with this gripping tale of crime and death in Japan. A Film-Noir, so you know that they are going to die in the end, but it is the journey that matters and who gets their comeuppance in the end. This is a well written (Harry Kleiner, Red Heat, Bullitt, Fantastic Voyage) and well executed example of its genre.

Picture a stream train pulling wagons through the Japanese countryside. On those wagons are soldiers guarding their ordinance, this is a joint journey between the Japanese army and the American army. When the train stops because of a peasants’ wagon stuck on the tracks the guards think nothing of it.

But it is not an innocent mishap, no this is a heist, suddenly there is an incapacitated driver and a dead soldier, an American soldier. Things are looted and a truck makes off with the ill-gotten gains. A peasant woman discovers the grizzly sight, and sounds the universal alarm (a very loud scream).

the Japanese Inspector Kito, (Sessue Hayakawa, The Bridge on the River Kwai) the American is Capt Hanson (Brad Dexter, The Magnificent Seven) and he wants a list of everything stolen and the burning desire for  justice, for his fellow compatriot.

And, Two boxes of Smoke Pots.

There are no leads to the crime until five weeks later when another heist has taken place and one of the gang was gunned down by one of his own men. The balistics are back and it was the same P38  that killed the soldier on the train. A lead, the guy is fighting for his life in ER.

Webber won’t rat on his comrades, but he is worried about his new wife who he secretly married, Mariko Webber (Shirley Yamaguchi, Fighting Street, Japanese War Bride) and only her uncle knows

about it. A dead end until they find a letter in Webber’s pocket from convict Eddie Spanier (Robert Stack, Airplane!, Caddyshack II, Joe Versus the Volcano) wanting to join him and his gang.

Three weeks later, Eddie Spanier arrives in Tokyo, and he needs to make waves in the underground, so he can get to meet head honcho Sandy Dawson (Robert Ryan, The Dirty Dozen, The Wild Bunch, The Iceman Cometh). Can Eddie get what he wants?

Sit back and watch the tale unfold.

House of Bamboo is available on Blu-ray