Eureka Classics brought us The Specialists, now Eureka Masters of Cinema brings another piece of cinematic history with the definitive Spaghetti Western in The Great Silence. Once again written and directed by the maestro Sergio Corbucci (Duel of the Titans, Son of Spartacus, Django), who gives us a dark subversive Spaghetti Western, veering from the anti-hero plot lines to give us a story about the senseless deaths that were occurring at the time (Che Guevara and Malcolm X) and also when the film was set.

High in the mountains of Utah, a man rides through the deep snow left by a severe blizzard that has swept the frontier. This blizzard has caused the inhabitants of Snow Hill to be cut off from supply lines and they have had to revert to base instincts of thieving and killing animals (horses) just to survive.

These actions have made the residence outlaws in the eyes of the local banker/ judge of peace Henry Pollicut (Luigi Pistilli, For a Few Dollars More, The

Good, the Bad and the Ugly). There is a bounty on every man in the town, and this has attracted a large band of ‘Bounty Killers’, who would rather kill than take you in alive. This band of licensed killers is led by the ruthless Loco (Tigrero) (Klaus Kinski, For a Few Dollars More, Doctor Zhivago) who kill for the fun of it and for the dollar.

It seems the towns folk are doomed to a leaded death, but there is hope in ‘Silence’, a young man with a very fast trigger finger to his semi-automatic Mauser C96, and he fights for the little man, against the corrupt. They try to ambush Silence, but he is too wise to this tactic, and he soon dispatches six of them.

The Bounty killers will use any scheme to get their bounty, even posing as lawyers to claim their $1000.

One of the outlaws is determined to see his wife Pauline (Vonetta McGee, Blacula, Shaft in Africa). But Loco is lying in wait, and takes Pauline hostage to get James to come out under false pretenses, but for gunning him down in cold blood. You shouldn’t do that to a woman, and she swears vengeance on Loco. She has heard of a man who fights for justice. This man is Silence.

Prepare yourselves for a dark tale set in the stark white of the mountains of Utah. A true hidden gem. 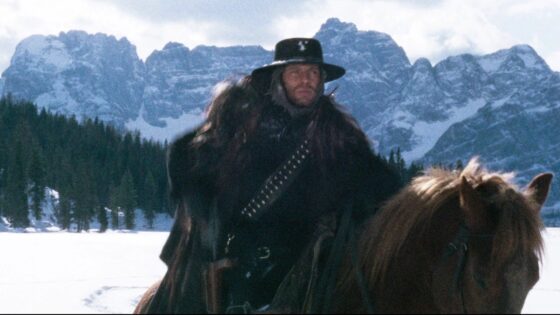 The Great Silence is available on Blu-ray