A Flying Monk, A Flying Demon and Flying Swords.

Visionary Hong Kong film director, producer and screenwriter Hark Tsui (Once Upon a Time in China film series (1991–1997), The Taking of Tiger Mountain) directs his fourth film with Zu: Warriors from the Magic Mountain which challenged the established way of making Hong Kong films in the 1980’s. Bringing elements of ghost stories, fantasy and martial arts and fusing them into a fantastical tale of coming together and friendship.

Mount Zu the collective name of a mountain range found West of China in Pa-Shu, otherwise known today as Sichuan.

For there to be chaos under heaven, there must first be chaos in Shu’

When all has been conquered under heaven, Shu will remain unconquered.

A time of turmoil as East battles West and North battles South, all done in bright colours, but there are victories and defeats and messengers must take this news to their leaders. One such messenger is Ti Ming-Chi (Biao Yuen, Once Upon a Time in China, Project A) who has to relay the massacre of civilians at San-Chang Brook, but his message is not taken well by the two leaders who disagree and as always the easiest thing to do is blame the messenger.

He flees with the soldiers giving chase and with a deft somersault from his horse (Wires shown), gives his pursuers the slip and luckily he finds a boat near the shore. He boards and tries to get the owner to take him to the far shore, but he can’t and soon discovers a red soldier (Sammo Hung, Three Films With Sammo Hung (Eureka Classics),

Wheels on Meals [Eureka Classics], The Fate of Lee Khan, Jackie Chan’s PROJECT A & PROJECT A PART II) also hiding on the boat. (Red= Eastern and Blue=Western and they have been fighting for generations). They blame each other for their families deaths and they fight showing off their prowess with a sword, until they are discovered by another faction and have to fake fight to get away from all the other soldiers.

They get separated and Ti Ming-Chi discovers a creepy cave where he encounters black sheets with glowy eyes, which fly about trying to get him until Ting Yin (Adam Cheng, Shaolin and Wu Tang, The Legend of Fong Sai-Yuk) appears in white along with monk

Hsiao Yu (Damian Lau, Last Hurrah for Chivalry) and his underling. Together they  defeat the “Vampires” and Ming-Chi is impressed and wants to become this hero in white’s apprentice. This is the first step in defeating the greater evil, The Blood Demon (Red Sheet). With the aid of the countess (Brigitte Lin, Police Story, Swordsman III: The East Is Red) they must reach the twin blade to defeat the great evil of the Blood Demon. 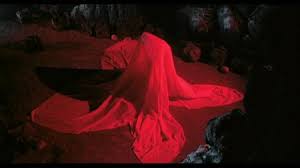 With the finest of 1983’s special effects this is a romp into the supernatural. 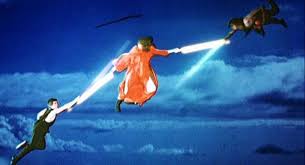 Zu Warriors of the Magic Mountain is available on Blu-ray