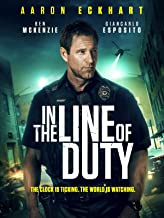 The Countdown Has Started

Beat cop Frank Penny (Aaron Eckhart, Erin Brockovich, The Core, Paycheck, The Dark Knight, Olympus Has Fallen, I, Frankenstein) spends his time on the back streets of the city.

Meanwhile across town the Chief-of-Police Volk (Giancarlo Esposito, Breaking Bad, Better Call Saul) and his men are on a stakeout to catch a kidnapper in a ransom sting. But when they are about spring the trap the kidnapper spots one of the officers and makes a run for it (a very long run for it), so much so that Frank

hears his radio and knows that the perp is near him. He starts his own marathon even though he is told to stand down, once he spots the quarry he is like a terrier and keeps chasing him. During the chase internet news hounds Clover (Jessica Lu, The Young Kieslowski) and roving online reporter Ava Brookes (Courtney

Eaton, Mad Max: Fury Road, Gods of Egypt) hear the commotion and Ava decides that the people of the planet deserve unedited, unadulterated news feed through their internet news feed.  Mean while Frank catches up with his quarry (he doesn’t know why he is wanted) and he is cornered in an alleyway. When Max Keller (James Hutchison III, The Last Witch Hunter) pulls a gun out of nowhere Frank has no option than to shoot him. Killing him, he soon finds out that the dead guy is the guy who has kidnapped Volk’s daughter, who is going to die in sixty four minutes and Frank is off the force for two days.

But Frank is now on a mission to save the little girl and when Ava finds him his bad day just gets worse as she films everything, hell bent on finding the girl as the whole world watches on. Throw in a vengeful Keller brother, Dean (Ben McKenzie, Lessons in Love) who has a large arsenal to bear on Frank and the police force and you are in for one heck of a ride.

In the Line of Duty bring a new angle on the filming with the use of Ava’s live stream as part of the main story and with Eckhart trying to show off his tougher side this film is a little quirky, switch off the brain and open the popcorn.