3 stars for this sometimes moving but slightly confused anime. 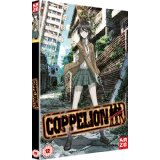 Based on the seinen manga series written and illustrated by Tomonori Inoue, Coppelion is brought to the screen by GoHands, the studio behind the Mardock Scramble series of films.

It is set in a Japan which has seen further nuclear tragedy, after a terrible accident at a plant in Tokyo has left the entire city uninhabitable and in ruins. 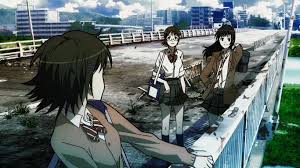 Coppelion (named after Coppelia, a character in the 19th Century French comic opera) is a crack team of school children from National Defence Academy Technical School, under the command of Vice Principal Onihei Mishima (Keith Silverstein – Nura: Rise of the Yokai Clan). They have been genetically engineered to be impervious to radiation and therefore able to enter the city to search for any survivors and undertake rescue missions. 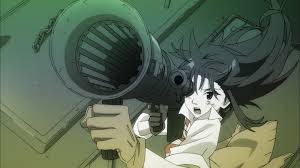 We follow the adventures of three of these Coppelion, Ibara Naruse (Erica Lindbeck – Sword Art Online II), Aoi Fukasaku (Cassandra Lee Morris – Puella Magi Madoka Magica) and Taeko Nomura (Shelby Lindley – K-On!), who have been given the task of entering central Tokyo to investigate a distress signal emanating from the ruins.

There they will discover that there is a lot more going on in these ruins than anyone thought. Multinational corporations are turning their eyes towards Tokyo for waste disposal purposes and a mysterious “Delivery Man” is supplying and coordinating those who were left or chose to stay behind. 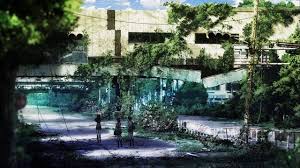 There is no shortage of colourful characters and there is certainly no disputing the beauty of the animation, the backdrops are nothing short of stunning. It does have some issues however, the story is a bit confused and it loses it’s way somewhat towards the end. There is also way too much weeping and wailing, it gets very irritating and I’ve never seen so much excitement over a pregnant woman.

In general though, this is a great watch, good fun and thought provoking at the same time and well worth adding to your collection, if only for the glorious visuals.

“What you’re seeing now is the epicentre that destroyed ninety percent of the old capital. So citizens of Japan, no, people of the world. Pandora’s box has been opened by human hands. Our problem now is, we don’t know how to close it.” 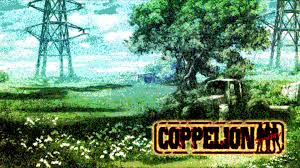 Coppelion is available to buy now on DVD.