Fists, Feet and lots of Cash.

Former stuntman turned writer/director Jesse V. Johnson (Savage Dog, The Debt Collector) brings us a hard hitting fast paced buddy movie that has you on the edge of your seat from the opening scenes.

French (Scott Adkins, The Legend of Hercules,  The Expendables 2, The Bourne Ultimatum) due to being shot twice in the chest, has been lying low for months, taking a job as a bouncer in an LA bar, his English accent always seems to draw attention and get him in trouble with patrons and the bar 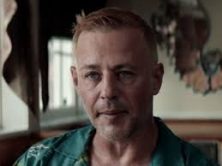 Due to French’s condition at the time and the blood stains in the Coupe he had to sell it to a chop shop for a fraction of its value which doesn’t impress Sue. But he is not here for retribution he has a job offer from his old friend Tommy (Vladimir Kulich, Smokin’ Aces,  The Equalizer) a cool $70,000 for 2-3 days work collecting debts.

The now out of work French reluctantly takes the offer and now they have three locations to collect from and Sue decides that the $150,000 that Mal Reece (Marina Sirtis, Star Trek: Picard (TV Series), Crash, Star Trek: Nemesis, Star Trek: Insurrection) owes should be the first to collect, so they are Las Vegas bound in Frenchies

Once inside Mal’s bar she is very accommodating, which Sue says is not in Mal’s nature and tells Frenchie to be on his guard as he has known Mal intimately. 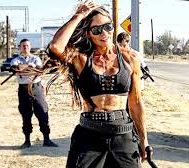 When leaving Mal’s for their second pick up this is where our pair of pals realize that perhaps their couple of days work is not going to go the way they hoped. As Mal has sent her number one after them to retrieve the money.

Payback is a romp with plenty of good banter between the two stars and lots and lots of fighting with fists and feet and how do, so many bullets miss so many people, and who are those two fellas following them? 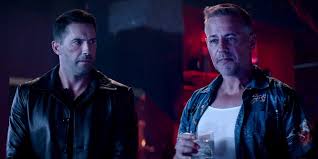 Payback is available on DVD