2 stars for this disappointing crime drama/compreparedller. 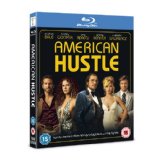 American Hustle is written and directed by David O. Russell (Silver Linings Playbook, Three Kings) and he carries on his theme here of trying to present “human opera”.

It is a work of fiction although some of the characters are based upon real-life counterparts from the criminal world.

American Hustle starts in 1978 and tells the story of Irving Rosenfeld (Christian Bale – The Dark Knight Rises, American Psycho), a con artist working scams with his mistress, Sydney Prosser (Amy Adams – Man Of Steel, The Master), who has improved his success rate by posing as English aristocrat “Lady Edith Greensly”.

Irving is worried that although he loves Sydney, if he leaves his wife, Rosalyn (Jennifer Lawrence – Silver Linings Playbook, The Hunger Games) she will deny him access to her son Danny. She has also threatened to go to the police with details of his work if he tries to leave. 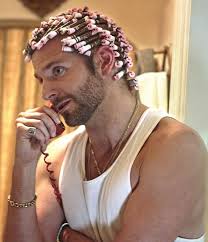 Things begin to go downhill with the introduction of FBI Agent Richard “Richie” DiMaso (Bradley Cooper – The Hangover Part III, Limitless), who is about as corrupt as they come. He has proof that Sydney’s aristocratic background is false, but offers to let them go free in return for the use of their skills to aid in four arrests.

And so begins the big scam, with Irving and Richie attempting to take down Mayor Carmine Polito (Jeremy Renner – The Bourne Legacy, The Avengers) of new Jersey, with an elaborate ruse involving a wealthy sheikh wishing to invest in America.

Matters grow ever more complicated as our tricksters find themselves becoming involved with mobsters and the local mafia and with Irving’s increasingly unstable wife seeming to be a constant threat to their plans.

This all sounds like a great idea for a story, when you see it written down like that it sounds like it couldn’t go wrong. But somehow it did. 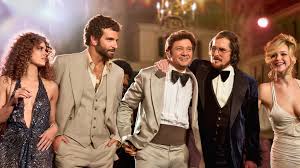 There is no denying that the acting performances are brilliant, yet because the is film so long (or at least feels like it is) and because it is so slow to get going, they get a bit lost in all the tedium of waiting for them to get to the point.

When they do, it is a good film, you just have to be prepared to wait about an hour and a half for it to happen. It’s also not really apparent why poor Christian Bale needed to put on so much weight for the part, it doesn’t bring much to the party.

It may be trying to be too many things all at once that causes it to fall short on most of them (although the comb-over arrangement sequence did make me laugh out loud).

Many people have raved about this film, so I may be in a minority, but it just doesn’t do it for me. It almost feels as if there is a Quentin Tarantino film in there somewhere, just trying to get out and give it the life it needs.