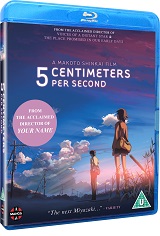 5 Centimeters Per Second was originally released in 2007 and is now available on Blu-ray in the UK for the first time courtesy of Manga UK.

It is produced, written and directed by the highly acclaimed Makoto Shinkai (The Garden of Words, Your Name) and follows a similar theme to his previous works, The Place Promised in Our Early Days and Voices of a Distant Star.

“We’d definitely be attending the same middle school. We’d always be together. I don’t know why but that’s what I believed.” 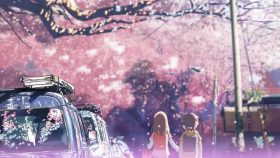 5 Centimeters Per Second revolves around the life of Takaki Tōno, 13 years old when the story begins. It is split into 3 different episodes, the first one being Cherry Blossoms.

We see Takaki with childhood friend Akari, as she explains that cherry blossom falls at a speed of 5 centimeters per second. The two are great friends, both social outcasts but finding strength with each other.

However, before they know it, Akari is forced to move away and the pair have to resort to writing to each other to keep in touch. When Takaki also has to move, he realises that it will be too far to visit, so he takes the train through a snowy night to see her. 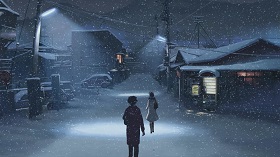 Episode 2 is called Cosmonaut. Takaki is now a teenager and has taken up archery. A girl in his class, surfing enthusiast Kanae, is in love with him but feels he yearns for something in the far distance.

Episode 3 is called 5 Centimeters Per Second. Both Akari and Takaki are now grown up but their lives have taken very different directions.

This is a beautiful film, with a very simple premise, that more often than not, things don’t turn out the way you thought they would and life has a tendency to interfere with your plans. It is a delicate, well observed and cleverly put together montage of hopes, dreams, love and loss which will have you captivated from start to finish. 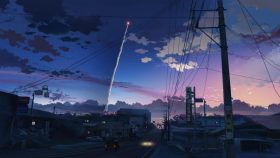 With its theme of time and distance and the influence they have on human relationships, this is a very relatable film which makes you reflect on your own life. As you would expect from Shinkai, it features glorious animation and sweeping vistas. The final episode is accompanied by One More Time, One More Chance by Masayoshi Yamazaki, which adds really well to the feel of the ending.

A wonderful and moving way to spend an hour. A must-own for fans of Makoto Shinkai and well worth adding to any anime collection.

“I don’t know why but whenever I read her letters, I always pictured her alone.”

5 Centimeters Per Second is available to buy now on Blu-ray and will be released on 29th October 2018.