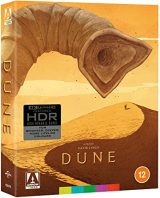 The classic-of-all-classic-Sci-Fi’s hits the shelves in this Limited Edition 4K UHD Arrow release. The David Lynch (The Elephant Man, Eraserhead, Blue Velvet, Twin Peaks (TV Series), Mulholland Drive) 1984 adaptation of Frank Herbert‘s (Dune Messiah, Children of Dune) Sci-Fi masterpiece that has been a hit with fans since 1984, once you are hooked, you can never be released. This Arrow release is for those fans, and it is a must for those who love Arrakis.

In the far future, the known universe is ruled by Padishah Emperor Shaddam IV (José Ferrer, Moulin Rouge, The Cockleshell Heroes). The most valuable substance in the empire is the drug melange or “spice”, which extends life and expands consciousness. The spice also allows the Spacing Guild to fold space, permitting safe, instantaneous interstellar travel.

The Guild fears a conspiracy that could jeopardize spice production and sends an emissary to demand an explanation from the Emperor, who reveals his scheme to destroy House Atreides. The Emperor fears Duke Leto

Atreides’ (Jürgen Prochnow, Judge Dredd, The English Patient, ) growing popularity—and a secret army he is reportedly amassing—threaten his rule. He plans to cede control of planet Arrakis (also known as Dune), the universe’s only source of spice, to House Atreides. Once they are installed there, the Atreides will be ambushed by their long-time arch-enemies, the Harkonnens, with help from the Emperor’s elite Sardaukar troops.

I must not fear. Fear is the mind-killer. Fear is the little-death that brings total obliteration. I will face my fear. I will let it pass over me and through me. And when it has passed I will turn the inner eye to see its path. Where it has gone, there will be nothing. Only I will remain.

Behind the scenes the Bene Gesserit sisterhood, have been running a ninety generation breeding program and one of their members has gone against tradition the Lady Jessica (Francesca Annis, Krull, The Debt

Collector) concubine to Leto. She was to only bear daughters, but she loves Leto and gave birth to Paul (Kyle MacLachlan, The Doors, Twin Peaks (TV Series)). Could this aberration to the program be the fabled Kwisatz Haderach (super being), and change the fate of the universe?

This release is definitely for the die-hard fans as  it comes in UHD and has a second disk, with brand-new featurettes and the main disk is also packed with special features.

You have the Audio Commentaries, Impressions of Dune (documentary), David Lynch (2003), Designing Dune (2005), Dune FX, Dune Models and Miniatures, Dune Costumes, Deleted Scenes by Raffaella De Laurentiis (the bit we have all been waiting for), Destination Dune, Trailers and TV spots and an Image Gallery.

Dune is a big story and the film is avant-garde, leading the way forward for all lavish Sci-Fi movies to come. Huge cast, huge sets and bigger monsters.