4 stars for this gentle and well written slice-of-life anime. 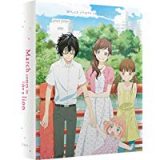 March Comes In Like a Lion is based on the ongoing manga series by Chica Umino (Honey and Clover). It is adapted to anime by studio Shaft (Bakemonogatari, Puella Magi Madoka Magica) and directed by Akiyuki Shinbo (Negima).

This release is Season 1 Part 1 and features episodes 1 – 11 on Blu-ray with both the English dub and original Japanese track with English subtitles in Collector’s packaging. 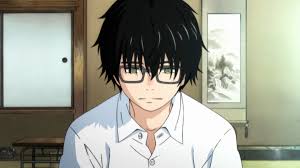 Rei Kiriyama (Khoi Dao – Fate/Apocrypha) is a 17 year old professional shōgi (Japanese chess) player. He became a professional while in middle school and was a very promising young player. However he moved to Tokyo to live alone following the death of his parents while he was still in middle school. He feels lonely and isolated, rarely attending school as he concentrates on playing shōgi.

His only company his own age is self proclaimed best friend and lifelong rival at shōgi, Harunobu Nikaidō (Zach Aguilar – Charlotte, One Punch Man). They have been competing since they were children, but Rei is clearly the better player. 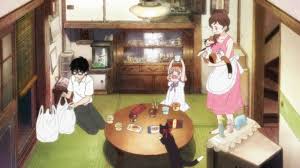 He has very few friends, however he does enjoy spending time with a family who live on the other side of the bridge in March Town. Akari Kawamoto (Laura Post – Kill La Kill, Knights of Sidonia) takes care of her two younger sisters, Hinata (Kayli Mills – Occultic Nine) and Momo (Xanthe Huynh – The Testament of Sister New Devil) following the death of their mother. 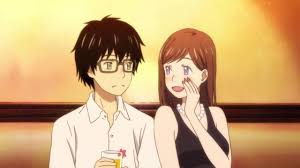 She befriended Rei after finding him passed out in the street, abandoned by his older shōgi competitors, and took him to her home to take care of him. He feels close to this family and they offer a glimmer of light in his otherwise dark world.

March Comes In Like a Lion is a very unusual slice-of-life anime. It has very well developed characters, who are easily relatable and each plays their own pivotal role in Rei’s life. It does have an interesting animation style, rather choppy and rough, which really brings home his feelings of intense isolation and loneliness and the opening sequence is nothing short of breathtaking. 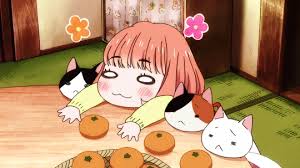 There are various different styles and colours employed, depending on the situation and it all works very well. This is a tale of a few individuals, all of whom have suffered loss in their lives and how they grow and learn to handle life together.

It will resonate with people from all walks of life, with it’s gentle yet persistent storytelling and it’s roller coaster of emotions. A great watch that could be easily overlooked and well worth adding to your collection.

“Every move I made felt like I was punching him with my bare hands. It’s so vivid. I can still feel it now.” 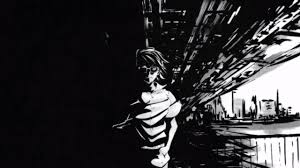 March Comes In Like A Lion Season 1 Part 1 is available to buy now on Collector’s Edition Blu-ray.