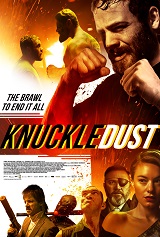 Knuckledust is written and directed by James Kermack (Hi-Lo Joe), who also stars and is his fantastic second feature film. Available now on V.O.D. courtesy of Samuel Goldwyn Films, it is an adrenaline fueled roller-coaster that will keep you guessing right to the very end.

“Expendability against expenditure. You give us disposable men to fight to their deaths and I give you disposable income to pay for the women who’d rather be dead than touch you.”

Hidden behind the “Church of Herod”, run by the upstanding Father Arkancide (David Schaal – The Inbetweeners) is a very big secret. Club Knuckledust is an elite underground fight club, featuring seven different levels offering a variety of dubious delights to suit all tastes. 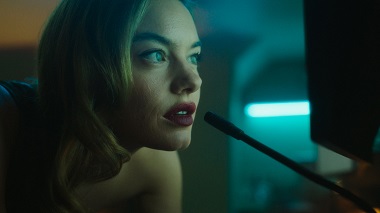 Presiding over all of this is sultry but unyielding manager Serena (Camille Rowe – Now Is Everything) and her dodgy partner Jeremiah (Gethin Anthony – Dead in a Week or Your Money Back), who delight in their seedy empire.

The main attraction for punters is the arena where veterans with no families to realize they are missing brawl to the death as the crowds bray. Here the champions are truly enormous men, including Rawbone (Olivier Richters – Ravers) and Tombstone (Guillaume Delaunay – Pinocchio). 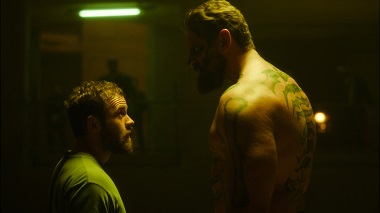 Things begin to go wrong when they try to get champion fighter Hard Eight (Moe Dunford – Vikings, The Dig) to throw a fight. He refuse, setting in motion a chain of events everyone will come to regret. Following a call, the police are dispatched to the club, and what they find is seven levels of dead bodies and only one survivor, Hard Eight. But is he the lone survivor, or a multiple murderer? 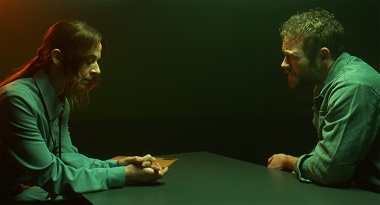 Knuckledust is an enormously enjoyable film. Although it carries an underlying serious message, it is laugh out loud funny. With its cast of larger than life characters and graphic novel style filming, even the most brutal sequences are delivered with tons of style.

Much of the hilarity comes from the police, a bungling but enthusiastic bunch headed up by Keaton (Kate Dickie – Undergods, Prometheus), in charge of the long suffering Redmond (Jaime Winston – Tomb Raider) and her lackeys Maccready (James Kermack) and Hooper (Dave Bibby – Bruised Sky). 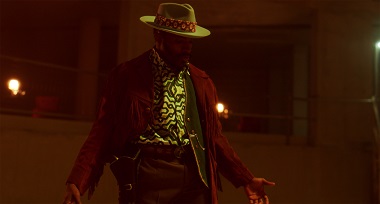 This really is very violent, well deserving of it’s 18 certificate and certainly not for those of a nervous disposition. With a glorious mix of action, humour and blood and a genius twist, this film is well worth a watch.

“Asked if anyone would miss you if you went missing. You said no. You made the decision to lie and now you get to make one last decision. You die, or she dies.”