4 stars of investigations with “one hell of a butler”! 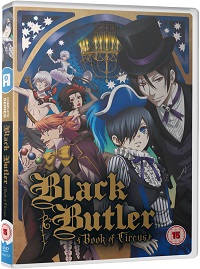 Black Butler: Book of Circus is season 3 of the enormously popular anime series based on the manga by Yana Toboso.

It is directed by Noriyuki Abe (Bleach) and brought to anime by A-1 Pictures (Your Lie in April, Sword Art Online).

“How many times must I tell you cooking requires fire, not firepower, you colossal idiot.”

After his mansion burned down three years before, killing his parents, he made a plea for rescue, which was heeded by the demon Sebastian Michaelis (J. Michael Tatum – Overlord, Brothers Conflict), with whom he made a pact, at the cost of both his eye and his soul.

Sebastian now acts as his butler, tending to his every need in hilarious fashion. His attention to detail and commitment to his job are second to none, but only of course because he is waiting to receive Ciel’s soul.

In addition to running the Phantomhive Estate, he also has to deal with the other staff, who are magnificently inept. There is the over enthusiastic cook Bardroy (Ian Sinclair – Noragami, Space Dandy), the clumsy maid Mey-rin (Monica Rial – Yona of the Dawn) and the clueless gardener Finnian (Jason Liebrecht – Karneval).

On top of all these duties, the young master Ciel is also Queen Victoria’s “guard dog”, tasked by her to solve crimes and mysteries too difficult for the police to solve. Helped by Sebastian, his ability to sniff out the truth and bring the criminals to justice is legendary. 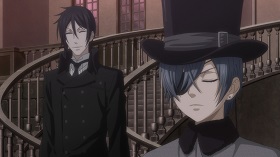 Their latest case begins when they receive a letter from the Queen requesting that they investigate a traveling circus, Noah’s Ark, which has just arrived in London. Everywhere they go, children are going missing and it is up to our two detectives to investigate.

They infiltrate the circus and begin to sniff around. There are many suspicious circus performers, including the ringmaster Joker (Matthew Mercer – One Piece), the Doctor (Alex Organ – No-rin) and Snake (Spike Spencer – Durarara!! x2) and even worse, there is a grim reaper present too. Will they be able to find and save the children?

As always, the story is riveting, the animation and music are great and there is plenty of humour, albeit very dark. It is an excellent continuation to a brilliant series and is well enough explained to work as a stand alone if you haven’t seen the first 2 series.

Black Butler :Book of Circus is a must-have and well worth adding to your collection. 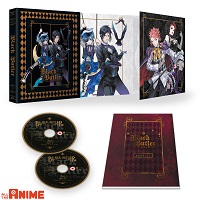 “He ruthlessly hunts all those who oppose him. This policeman of England’s underworld, this villainous noble, this rabid guard dog. Impressive monikers for a boy.”