4 stars as chaos reigns in Ikebukuro. 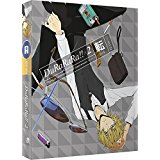 Durarara!! x2 Ten is part of the second series, which is split into three parts and is preceded by Durarara!! x2 Shou and followed by Durarara!! x2 Ketsu. It is based on the light novel series written by Ryohgo Narita and illustrated by Suzuhito Yasuda. It is produced by studio Shuka (91 Days).

This release contains episodes 13-24 and continues the tales from the district of Ikebukuro, one of the many city centres of Tokyo. The usual spoiler alert applies here, don’t read this if you haven’t watched part 1 yet.

“His love for people was an obsession. That’s why he watched their lives so closely.” 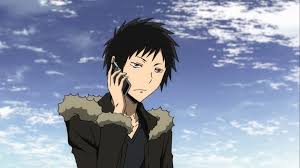 Following the events of the previous day and the attack on the information broker Izaya (Johnny Yong Bosch – Bleach, Space Dandy), the plot thickens on the streets. Izaya continues to work on his own private agenda, quietly pulling the strings in the background, to what end no-one knows. 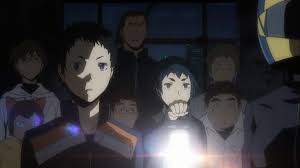 The Dollars, the online gang founded by Mikado Ryugamine (Darrel Guilbeau – Magi: The Kingdom of Magic) are starting to fragment, with a rebel faction beginning to emerge, wearing shark masks and supposedly led by Aoba Kuronuma (Kyle McCarley – Erased). Another potential problem has also arrived back in the city in the form of Masaomi Kida (Bryce Papenbrook – Brothers Conflict), who appears to be trying to put the Yellow Scarves gang back together. 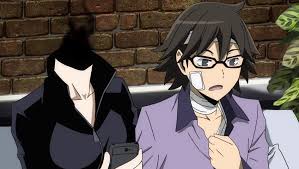 Celty Sturluson (Kari Wahlgren – Rick and Morty), the headless horsewoman is still looking for her head, with the help of the love of her life and doctor Shinra (Yuri Lowenthal – Tiger and Bunny), all the while trying to stay under the radar and avoid capture.

There are numerous other storylines running alongside this one, Shizuo (Crispin Freeman – Naruto Shippuden) and Varona (Brina Palencia – Tokyo ESP) have teamed up and absolutely everyone is up to something. 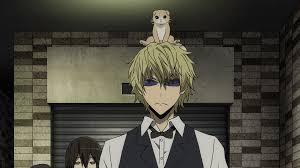 As with Shou, there is an awful lot going on here and it is still quite tricky to keep track of it all. However, the stories are beginning to coincide more and as that happens the whole thing starts to make more sense.

The classical score which accompanies the episodes is very atmospheric and as ever the animation is stunning. A must own for fans of Shou and well worth adding to your collection. I can’t wait for the next instalment, when we will hopefully find out how all these stories finally come together.

“The city never takes a break, even for holidays. It keeps moving right along, even after everything that happened yesterday.” 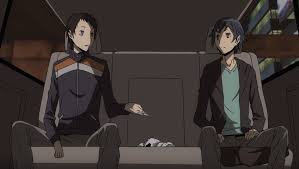