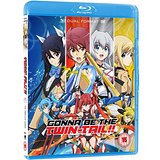 From Production IMS (Castle Town Dandelion) and director Hiroyuki Kanbe comes a bizarre series even for the Japanese’s strange sense of humour. At a 15 Certificate I think that the viewer should be of a sexually educated age and know that there are strange fetishes out there. But that said I found it very funny and thoroughly enjoyed viewing it.

Sōji Mitsuka (Austin Tindle, Assassination Classroom, Attack on Titan, Fairy Tail) has just started Yōgetsu Private Academy. He is a 15-year-old freshman who is obsessed with the hairstyle of twin-tails, he thinks he has died and gone to heaven as so many of the girls in the class sport twin-tails. One of those girls is Sōji’s childhood friend Aika Tsube (Sarah Wiedenheft, Tokyo ESP), a fiery girl with long dark twin-tails,

but Sōji would never go for the girl he grew up with.

After school the pair head for Sōji’s mums café the Adolescenza. Whilst chatting at a table they notice a white haired girl hiding behind a large newspaper but obviously keeping an eye on the pair. It turns out she is Twoearle  (Morgan Garrett, One piece, Ben-To) a large breasted young girl who wants to give Sōji a bracelet and if he puts it on she will let this virgin boy do anything he likes to her.

Eventually Sōji is wearing the bracelet and when he activates it there is an amazing transformation to Sōji as he turns into Tail-Red, a young girl with amazing powers to fight the strange aliens that are here to steal people’s twin-tail power which lies within every twin-tail wearer.

With his love of twin-tails he has immense power and when he takes on the head of the aliens Lizard gildy (there are many gildy’s and they all have a different fetish) he learns how to use the power of his Tail-Red.

It turns out that Twoearle is from another planet and has strange skills and technical abilities from her more advanced planet. She fancies Sōji and with his mother’s approval is allowed to stay with them and make her boy a man.

When the alien attacks become too much for Tail-Red there is one logical choice. Aika becomes Tail-Blue and aids Tail-Red in his fight against the twin-tail stealing aliens.

Finally Class president Erina Shindō (Mikaela Krantz) joins the affray as Tail-Yellow with her breast enhancing outfit, much to the annoyance of the underdeveloped Tail-Blue.

This is twelve episodes of some strange shenanigans as the Twin-Tails take on the alien horde with their flaming swords, guns and long pointy sticks.

“What is this madness, You freely remove your own armour, exposing your hideous large milk makers. Is this a challenge to a dual?” 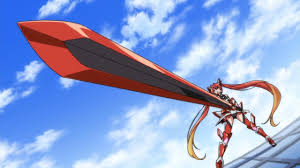