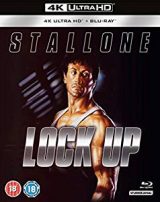 The 1980’s was when Sylvester Stallone was rising high as a movie star with the likes of Rocky, First Blood, Cobra and Tango & Cash, but squeezed into these favourites is this lengthy prison drama directed by John Flynn (Best Seller, Brainscan) who seems to have been plucked from obscurity and once he was finished with this project he returned to the underside of the stone he was found under. For a prison drama at 1 hour 49 mins it is a bit long in the tooth, but if you are a true die-hard Stallone fan this a must for your collection.

Frank (Sylvester Stallone, Rambo Trilogy, Cliffhanger, Escape Plan 3, Backtrace) enjoys time in his 50’s style garage where every tool has its place and the floor is spotless. He and his girlfriend Melissa (Darlanne Fluegel, To Live and Die in L.A.) enjoy strolls in the park where Frank teaches the kids American football before he returns to his open prison where he is running down the last six months of his prison sentence. Frank is well liked and gets on with all the guards and prisoners alike.

During a stormy night a prison van turns up at the prison and requests a prisoner transfer and it turns out that its Frank. Brutally grabbed and cuffed he is dragged out shouting and kicking but to no avail, he is thrown in the van and carted off to the maximum security Gateway Prison run by Warden Drumgoole

“Convict… two things. One – I am Meissner. Two – Never f#ck with Meissner. Inside.”

Franks new predicament is all to do with the warden who has history with Frank who got him demoted to this dump Gateway and now he plans to exact payment for his misfortune.

“This is hell, and I’m going to give you the guided tour.”

The Warriors) and his lackey’s, he does have an ally in Dallas (Tom Sizemore, Saving Private Ryan, Pearl Harbor, Black Hawk Down) who steals the show, lifer First Base (Larry Romano, Donnie Brasco, The Thin Red Line) and mechanic Eclipse (Frank McRae, Licence to Kill, Loaded Weapon 1, Last Action Hero).

How and will Frank survive the last six months of his sentence?

Lock Up is for the die hard Stallone fan. 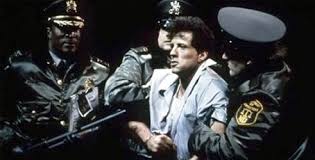 Lock Up is available on 4K, Blu-ray, Digital, Steelbook and DVD