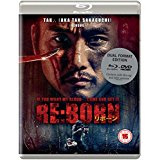 A Ghost, a Little Girl and Death.

Yûji Shimomura (Death Trance) goes from being a stuntman to the director of this close quarters Japanese Martial Arts bloodfest. A simple tale of vengeance and revenge with brainwashed children thrown in for good measure. But boy this Ghost has some considerable material skills, amazing.

In the intro we see special forces on a training mission to capture a ‘Ghost Tactic’ but it isn’t long before the bodies start falling as the unseen assassin takes out all the soldiers like a silent ghost.

Toshiro (Tak Sakaguchi, Samurai Zombie) runs a convenience store in a small coastal town in Japan, he takes care of Sashi (Yura Kondo) a young girl that dotes on him. When not at work they hang out at his friend Tsuno’s bar. Tsuno like to show his prowess with throwing stars on his dartboard, but Toshiro never seems to react to anything, however he is harbouring dark murderous thoughts which he shares with his doctor, much to her dismay.

Toshiro doesn’t even react when two youths come in the store and rob him at knife point, he just puts the float back in the till from his own wallet. The pair of them go to visit ‘Uncle Kenichi’ (Takumi Saitoh, Space Battleship Yamato) at the hospital where he is convalescing after a horrific accident saving Toshiro’s life.

Toshiro seems to have a sixth sense when it comes to danger. When he and Sachi leave the hospital Toshiro sends Sachi home, claiming he has forgotten something. He surveys a busy plaza and soon spots two figures that don’t fit in. As swift as anything he has disarmed and killed one gunwoman and makes his way towards the other assassin dodging bullets as he goes he dispatches him in a most unique way.

This was a message to Toshiro, his past is catching up with him, he was a member of an elite special forces squad which he left three years earlier due to the  fact that their boss ‘Phantom’ (Akio Ôtsuka, Durarara!!x2, One Piece, Naruto: Shippûden) was brainwashing young children and using them for experiments.

Now it is time for Toshiro to show his talents in killing at close quarters, silently and deadly.

Re:Born is an edge of the seat ride in how to dispatch large numbers of men with fewest moves. You will believe a Ghost lives.

Re:Born is available on Dual-Format