Cold Pursuit is the Hollywood take on the 2014 Norwegian film Kraftidioten (Hans Petter Moland, The Beautiful Country) and he reprises his directorship for this version as well, to take the locations from the vast cold of Norway to the Rocky Mountains of North America. Wrap up warm for this one. Cold Pursuit is billed as a Action, Crime, Drama but this is the best Black comedy I’ve seen this year. Just wait for the 36 second morgue scene, hilarious.

Nels Coxman (Liam Neeson, The Lego Movie 3D, Unknown, Non Stop, Tokarev) is the citizen of the year in Kehoe, his snow-locked town in the Rockies. He attained this accolade by being the snowplough driver, keeping everything moving to and fro for this

popular skiing resort. He lives with his proud wife Grace (Laura Dern, Star Wars: The Last Jedi) and son Kyle (Micheál Richardson, Anchorman 2: The Legend Continues) who works at the local airport along with his friend Dante (Wesley MacInnes, Warcraft: The Beginning).

‘Viking’s’ (Big time drug dealer) thugs, Speedo (Michael Eklund, The Hitman Never Dies)  and Limbo (Bradley Stryker, The American Dream). Through the snowy night they drive and Speedo injects something into Kyle as Dante manages to break his bonds and leap from the moving vehicle. Speedo chases with bullets flying, but Dante disappears over a snow drift.

Lord of the Flies book, all the answers you’ll ever need, are in that book.

Speedo and Limbo drop Kyle’s body off in plain sight the next morning in Denver’s café district (he is the first body, many more to come). We then get our first glimpse of Trevor ‘Viking’ Calcote (Tom Bateman, Murder on the Orient Express), a man who has inherited the drug empire from his father.

Viking is a very fussy eater, due to his father’s ‘breakfast of champions’ which is

very inconvenient for his young son Ryan (Nicholas Holmes, The Shack) and his estranged wife Aya (Julia Jones, Wind River). With his right-hand man Mustang (Domenick Lombardozzi, Bridge of Spies) he runs his empire smoothly, with Kehoe under the Viking’s partner, the native American White Bull (Tom Jackson, Pride of Lions, Star Trek: The Next Generation) in a deal that was struck thirty years ago.

“Ok pops, there’s the door. Now I don’t what igloo you crawled out of. But I think it’s time you crawled back in. And trust me, that’s your, er best move.”

Nels life falls apart as they lay Kyle to rest, that’s when the black comedy starts, with 36 seconds in the mortuary and many more to come. Grace totally goes off the rails as 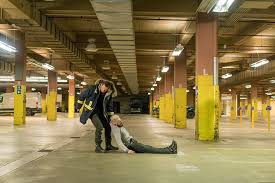 does Nels. At his depot he gets out one of his hunting rifles and sits there contemplating pulling the trigger when he  is disturbed by the bloodied Dante. It doesn’t take long for Nels to get the first name (Speedo) for the ladder to the top and kill the man responsible for the death of his son.

Along the way there will be mix ups on both sides and death will ensue.

As the temperature drops, the body count rises.

Cold Pursuit is available on Blu-ray DVD and 4K