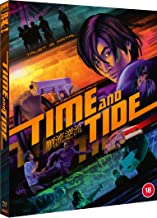 Classic Martial Arts filmmaker, writer, director and Producer Hark Tsui (Zu Warriors From the Magic Mountain, Once Upon A Time In China Trilogy, Iron Monkey, The Taking of Tiger Mountain) comes to the twenty-first century with this Hong Kong and South American crime fiction. Where young men have to find their place in society to take their lives forward.

ht and a couple of girls walk into a bar, but they are arguing, one leaves, the other goes to the bar. She asks for some of the good ‘Ice,’ but barman Tyler (Nicholas Tse, New Police Story, A Chinese Tall Story)

just gives her a bucket of ice, which ends up all over the bar. Well obviously that’s the start of a good night and they end up very drunk, and in the morning she is ill and late for work, and he is naked. In a mad dash he puts his pants on and finds out that his date is a narcotics cop of the Hong Kong police force. But the most important thing on her mind is did they do it?

Well I still have my pants on!

Nine months later and the evidence is obvious of what happened that night as officer Ah Jo (Cathy Tsui, When a Man Loves a Woman, The Heavenly Kings)is heavily pregnant and she and her lesbian lover are not happy at all. But in the intervening time Tyler has had an epiphany, he wants to retire to somewhere really cool like South America, specifically Aracaju beach, where the living will be easy. But to do that he needs money, lots of money. The way he is going to achive this is by working for Uncle Ji (Anthony Chau-Sang Wong, Infernal Affairs, Initial D – Drift Racer) as an unlicensed bodyguard. With this job he earns well and being the man he is now he gives a more than fair portion to Ah Jo.

She wants none of it and half the time her dog eats it.

His job leads to some crazy jobs, looking after scared women and now they are hired to protect a man during his birthday party. Where his favourite children will be present, and so will his daughter Ah Hui (Candy Lo, The Eye, Six

Strong Guys) and her husband Jack, who turns out to have connections to Tyler’s dream location. A gang called the Angels, and they are out to cause a lot of trouble, whilst setting up a business in Hong Kong, and it is down to Jack and Tyler to stop them, whilst looking after very pregnant women.

What could possibly go wrong?

Time and Tide has plenty of action as martial Arts are used just as much as the guns are fired, and why the heck would you jump out of a perfectly good window? Not just once but multiple times. Time and Tide will take you on a thrill ride down the sides of Hong Kong’s high-rise residential buildings.

Time and Tide [Eureka Classics] is available on Blu-ray