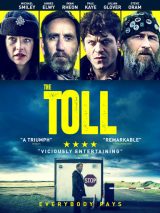 Dark, Messed up and Welsh

A Mexican Stand-off in Pembrokeshire.

Ryan Andrew Hooper brings us his first feature film, penned by Matt Redd (Casualty (TV Series) (written by – 1 episode)) who writes a  dark brooding tale of a man with a darker past. Set in the lovely county of Pembrokeshire, Wales, UK, where the snow comes across the sea horizontally and shapes that beautiful landscape, the Toll is gripping and will have you chastising yourself for laughing at the wrong parts.

“The serenity for which he laboured was shattered, as he realized the little time he had in life to read so much.”

(TV Mini Series)) asking questions of the man (Michael Smiley, Doctor Who (TV Series), Big Fat Gypsy Gangster) who has tended the toll booth in the middle of nowhere in the West for the last twenty-nine years.

Toll Booth (Smiley) spends his day sat at his booth, just reading his book and taking the forty pence toll of

people that happen to wander across his patch of concrete. Police officer Catlin spends her time sat at the roadside speed trapping cyclists on the accident black spot, while Toll Booth phones Cliff (Paul Kaye, Game of Thrones (TV Series), Doctor Who (TV Series)) the ambulance driver to tell him his medical supplies have arrived, and need to be collected.

Catlin’s day just suddenly takes a sharp turn as a call comes in about a terrorist attack at Henry’s (Steve Oram, Code 404 (TV Series), A Dark Song), the local

petrol station and convenience store, But Catrin soon works out it is the work of the local Morgan Triplets (Gwyneth Keyworth, Game of Thrones (TV Series), The Trouble with Maggie Cole (TV Series)), out looking for a bit of fun, they stopped by the toll booth before stopping at the petrol station.

The girls stole Toll Booth’s possessions including £1:20 toll money, his one-pound watch and his cheese and pickle sandwich. This is a job for Dom (Iwan Rheon, Game of Thrones (TV Series), Our Girl (TV Series)) a leather clad biker who does Toll Booth’s bidding.

If Toll Booth thinks his day has got off to a bad start with the triplets, well just wait a minute as a Rolls-Royce pulls up at the booth and the guy driving asks for directions for the ferry. This lost tourist is not any tourist, it is Elton (Gary Beadle, Grantchester (TV Series), We Die Young), this is man that works for Mr Magnus (Julian Glover, Star Wars: Episode V – The Empire Strikes Back, Indiana Jones and the Last Crusade) who has been looking for Toll Booth for the last twenty-nine years.

Thankfully for Toll Booth, Cliff and his ambulance arrive, and from thereon-in everything goes down hill for a lot of people. The Toll is a riot of dark humour, and will appeal to all the dark hearts out there. Because this film has a female Elvis impersonator Dixie (Evelyn Mok, Spider-Man: Far from Home) and her indecipherable sidekick Tab (Darren Evans, Submarine), now you know you are going to have a good show.

The Toll is available on Amazon Prime