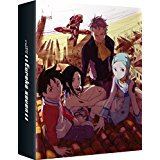 Eureka Seven was first released in Japan in 2005 and was originally called Psalms of Planets Eureka Seven. It was created and produced by Studio Bones (Fullmetal Alchemist, Space Dandy) and directed by Tomoki Kyoda (Ouran High School Host Club, RahXephon).

This release includes all fifty episodes of the original series and lots of new special features in collector’s packaging.

“Don’t beg for things. Do it yourself or else you won’t get anything.”

Eureka Seven is set in the year 12005, in a world where humans have been displaced by the arrival of the Scub coral, a lifeform which has merged with the planet. 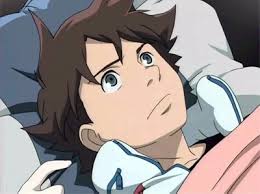 Renton Thurston (Johnny Yong Bosch – Free! Eternal Summer, Durarara!! x2) is a fourteen year old boy, the son of the late Adroc Thurston, a military researcher, widely regarded as a hero. He lives with his Grandfather at the family garage and is expected to join the family business, training to become a mechanic, but this doesn’t interest him at all. His favourite pastime is Lifting, similar to surfing but riding waves of Trapar in the sky instead of water. 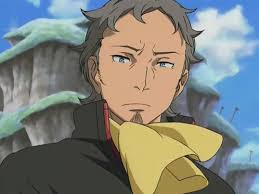 He dreams of joining a renegade group called Gekkostate, lead by the super cool Holland (Crispin Freeman – Naruto Shippuden, Noein: To your Other Self). They publish a magazine,  “ray=out”, in which they document their legendary Lifting techniques.

His dream comes true in the strangest way possible when one of Gekkostates’  L.F.O.s (giant mechs which can ride the waves of Trapar) crashes into his room, completely destroying it. This is a famous L.F.O., the one on which all subsequent lines were modelled, known as the Nirvash Type ZERO. 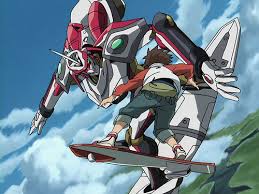 Piloting the L.F.O. is the lovely and enigmatic Eureka (Stephanie Sheh – Erased, Sword Art Online), with whom Renton immediately falls head over heels in love. With the help of a part created by his Father, they fix the Nirvash and Renton goes with them to finally become a member of Gekkostate. 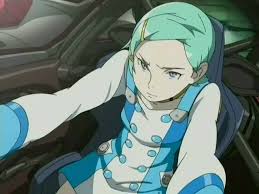 However, he soon discovers it’s not all he thought it would be, as he comes in for constant teasing from the other members, especially L.F.O. pilot Talho (Kate Higgins – Bleach) and Eureka’s’ children. He decides to stay anyway because of his feelings for Eureka and together the embark on adventures which will decide the fate of the world.

Eureka Seven is a great series, really enjoyable to watch and a well written story. It is an interesting blend of science fiction, action, adventure and romance. Unsurprisingly it spawned a number of spin offs, including Eureka Seven AO Parts 1 and 2, which are equally enjoyable.

“This is a light that destroys us and brings us all to death. And yet, it is so beautiful.”