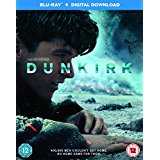 This war film was written, directed and produced by Christopher Nolan (Interstellar, The Dark Knight Rises) and is an award winning film and rightly so, as this film transports you back to 1940 and the beaches of Dunkirk. With a cast of thousands and practical effects the $100 million budget you know the effects are going to be big.

France has fallen into the hands of the Germans and the British army is in retreat as the French try and stall the advancing German army. While the British queue on the sands of Dunkirk awaiting to be taken to a destroyer in the deeper waters. Tommy (Fionn Whitehead, Queers) a young

British soldier is the sole survivor of a German ambush. He makes it past the French blockade, traumatised by his ordeal he rushes for the beach and comes across another soldier (Gibson) (Aneurin Barnard, Legend, The Adventurer: The Curse of the Midas Box) burying a body

The beach is full of soldiers all lined up for evacuation, but there is only one pier and that is packed to the gunwales with Tommies and the injured have priority over those capable of waiting. Everyone scatters when they hear the

whine of the German dive bombers that come vertically down before dropping their bombs. Tommy and Gibson grab a stretcher after the attack and pick up an injured soldier and high-tail it to the pier, which is under the control of Commander Bolton (Kenneth Branagh, Much Ado About Nothing) who lets the injured soldier on board but refuses Tommy and Gibson passage.

The soldiers all look to the skies and curse the RAF  for not being there for them, but they are and three spitfires head for France with Farrier (Tom Hardy, Legend, Mad Max: Fury Road) taking the lead after their commander was shot down. They manage to shoot down a bomber that is attacking a mine sweeper. They fly over  a small boat, the moonstone out from Weymouth before the Navy could requisition her for troop duties. Skippered by

Mr Dawson (Mark Rylance, The Gunman) and running the gauntlet with him is his son Peter (Tom Glynn-Carney, Casualty) and family friend George (Barry Keoghan, Trespass Against Us) as they head for the beach they manage to save an officer and a pilot.

Dunkirk is a well written and acted, with less dialogue than most films it relies heavily on the score by Nolan‘s favourite Hans Zimmer (Gladiator, Inception, The Dark Knight, Interstellar) that gives the mood of this film brilliantly. Dunkirk is a must see movie and a great gift for the war film fan in the house.

We must remember them all.