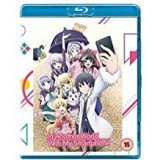 In Another World With My Smartphone is based on the Japanese light novel series written by Patora Fuyuhara and illustrated by Eiji Usatsuka.  It is adapted to anime by Production Reed and directed by Takeyuki Yanase.

“I forgot to mention something about your phone. I changed your map and navigation to match the world you’re in now.” 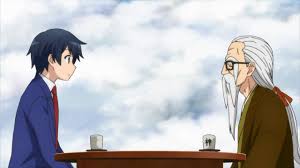 Touya Mochizuki (Josh Grelle – Snow White With the Red Hair, Yuri!! On Ice) is a fifteen year old boy who is accidentally killed by a stray lightning bolt fired off by God. Feeling guilty, God offers to resurrect him, but he can’t send him back to his old world.

He sends him to a fantastic world where magic is the norm and by way of apology allows him to take a modified version of his smartphone with him and grants him superior magic abilities and physical and mental prowess. 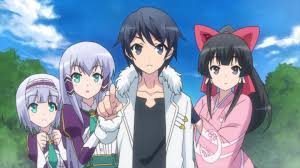 He is quick to adapt to his new surroundings, helping out and making friends with twins Linze (Jill Harris – Tokyo Ghoul;re) and Elze (Leah Clark – Eden of the East, Yurikuma Arashi), who invite him to join them on their adventures. They meet a samurai named Yae (Michelle Rojas – Psycho-Pass, Tokyo ESP) and together they travel the Kingdom, fighting magical beasts and righting wrongs.

Due to his kind heart, magical abilities and good nature, he soon finds himself befriended by lots of people in high places and followed everywhere he goes by a harem of lovesick females. 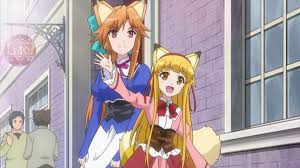 If you’re after in depth storytelling then this one is not for you, but if you fancy a bit of tongue-in-cheek fluff then this will definitely appeal. Good fun and well worth adding to your collection.

“There is no fouler union than that of sticky and gooey!”

In Another World With My Smartphone is available to buy now on Combo DVD and Blu-ray and will be released on 29th October  2018.