Hello readers this has been a great year for reviewing 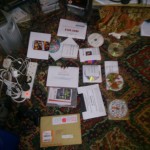 With 130 Films, TV Series and Anime we have watched a lot of episodes, some a lot better than others, (no thanks Portlandia).

But a 1 star does not always mean you should not watch them, just that you have been alerted when you may want to face them.

So here we go with the first category. TV Series and Documentaries:

In 4 Chasing Ice  5 Stars. The exploits of James Balog in the cold wastes of Greenland, Iceland, Alaska and Montana and how humans are affecting the Planet.

In 3 Music and the Monarchy 4 Stars. This is the story of music and its patronage by the Monarchs from the last 700 years, the only reason it wasn’t 5 Stars was because of David Starkey’s belief that he is more important than his subject.

In 2 Shaun the Sheep 5 Stars. This Series 3 of lovable Sheep’s Bleating exploits around the farm.

In 1 Utopia 5 Stars. Written, produced and presented by John Pilger. This Documentary tell the tale of the abuse of the native people of Australia.

So that is that category done and now onto Anime and what a great year it has been for this genre.

First off in Fifth K-ON!  4.5 stars for this heart-warming and funny tale of the Light Music Club. K-On! The Movie is based on the TV series of the same name and covers the time period between just before the band leave school and start University.

In Fourth Penguindrum 2 4.5 stars for this compelling and strange Manga series. How far will we go to save those we love? Mawaru Penguindrum 2 is directed and co-written by Kunihiko Ikuhara (Revolutionary Girl Utena) and is the second and final instalment of this fascinating story, comprising episodes 13 to 24.

In Third Deadman Wonderland 4.5 stars of glorious 18 certificate anime at its best. Deadman Wonderland is based on the Manga by Jinsei Kataoka and Kazuma Kondou and is the directorial début of  Koichi Hatsumi (key animator on Cowboy Bebop and Ghost In The Shell: SAC).

Second is Black Lagoon: Roberta’s Blood Trail 5 Stars of the Bloodhound set free of the tv censor. This is great, slick and beautifully violent as the name suggests as this is now an OAV (Original Animated Video), taking it away from the restrictions of the original two series. Roberta (The Bloodhound) is no longer a terrorist and she’s turned her hand to being the maid for the patriarch of the Lovelace Clan, but now she is on a revenge mission after her boss is assassinated at a political rally.

And in First Place is Sword Art Online Part One 5 Stars A must for all lovers of Great Anime and RPG Gamers. It’s 2022, the 6th of November and it’s about to turn 13:00 and this is the event Kazuto Kirigaya has been waiting for, along with most of the world, as SAO (Sword Art Online) goes live for the first time. Kazuto has been extremely lucky, as he knows what to expect from this experience as he puts on the Nerve Gear.

Right down to the big ones Films with many to choose from this was the hardest for us to agree on.

Number 5 is Do Elephants Pray?   Totally amazing film, 5 stars all the way. This is not a film that I would ever have even considered, let alone watched, but I am very glad that I did. Do Elephants Pray? is directed by Paul Hills (Boston Kickout, Mad In Tokyo) and written by the star of the film, Jonnie Hurn (The Zombie Diaries, Monk3ys) and within the first ten minutes you begin to realize that this is going to be a wilder ride than you ever expected it to be.

Number 4 is Song for Marion This is an amazing film, 5 stars of glorious British feel-good factor. Song For Marion is written and directed by Paul Andrew Williams (The Cottage, Cherry Tree Lane) and it is an emotional roller-coaster from start to finish. It tells the story of Arthur (Terence Stamp – The Adjustment Bureau, Yes Man), who is a proper grumpy old man, grumpier even than Victor Meldrew. Shy and nervous of meeting new people , his only inspiration in life.

In 3 is We’re the Millers 5 Star Laugh out Loud Comedy of the Year. From the Director who brought us Dodgeball: A True Underdog Story. Rawson Marshall Thurber continues his funny works. David Clark, (Jason Sudeikis, Horrible Bosses) has not changed since high school, he is still selling weed on street corners. But due to a mistake he gets his stash stolen along with a whole weeks takings. His boss Brad Gurdlinger, (Ed Helms, Hangover part III) is not pleased at all.

Number 2 is  The Hobbit: An Unexpected Journey, the extended 3D version If only, (Sighs Deeply) I could give this 1000 out of 5, I would. 5 Star film all the way. Now with an extra 12 minutes. Peter Jackson (Lord of the Rings trilogy) is the god of making epics and this first episode of the Hobbit (J.R.R. Tolkien) is just showing the others how it is done. (Take notice those thinking of doing the new Star Wars episodes) Gandalf (Ian McKellan – Lord of the Rings trilogy) turns up in Hobbiton and arrives at Bilbo’s (Martin Freeman – Hot Fuzz) house.

And Number 1 is Wolf Children

5 Stars of the most Beautiful Anime Ever.

This is the easiest film to review of the year.

This is Definitive, Beautiful and Heart Affirming.

The young woman Hana is at high school and  comes across an enigmatic young man who has a deep secret. He is the last Wolfman.

But she is in love as is he, she realises that what they have is special and rare.

Yuri (Snow) is born on a harsh winters night and is soon running around the floor of their town apartment.

That is our view if you disagree please tell us yours, but apart from that there is just time to wish you all a Very Happy New Year from us all at RRR.