4 stars of charming and gentle romance. 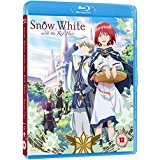 Snow White With Red Hair is based on the Japanese Shōjo manga written by Sorata Akizuki and adapted for anime by studio Bones (Fullmetal Alchemist, Noragami).

“He was born with a silver spoon in his mouth, but he learned to speak in the red light district.” 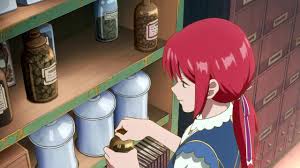 Shirayuki (Brina Palencia – Tokyo Ghoul, Good Luck Girl!) is a beautiful young woman who works as a herbalist in the Kingdom of Tanbarun. Unfortunately her best feature, her flaming red hair, brings her to the attention of Prince Raj Schenazade (Todd Haberkorn – Free! Eternal Summer, Fairy Tail), who decides he wants her to be his concubine. An independent and proud young woman, she is horrified at the idea and immediately packs her belongings and heads for the next Kingdom, Clarines, leaving behind her long red hair. 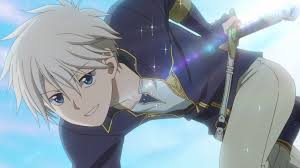 She finds an empty house, spends the night outside and in the morning she is rudely awakened by a handsome young man, Zen (Josh Grelle – Brother’s Conflict, Ben-To) and his two companions Mitsuhide (Ian Sinclair – Lord Marksman and Vanadis) and Kiki (Jamie Marchi – Heavy Object). She tells Zen her reasons for fleeing, but as they relax a messenger arrives from Tanbarun bearing a basket of apples. Zen takes a bite in Shirayuki’s place and immediately collapses, as the apples have been poisoned and Prince Raj has the antidote, forcing them to return. 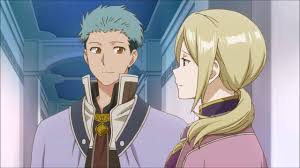 Zen recovers and comes to her aid and it emerges that he is in fact the 2nd Prince of Clarines and has worked to build immunity to poisons of all kinds. With Prince Raj warned off, Shirayuki decides to accompany the three back to Wistel, the capital city of Clarines. 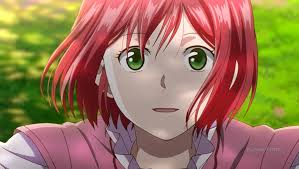 Once there, she sets up home and begins training for the position of Court Herbalist at the palace, so that she can spend time with Zen. As their feelings for each other grow, they begin to face opposition from all sides, due to the difference in their social status and must fight for their right to be together. 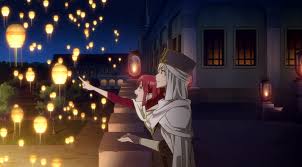 Snow White with the Red Hair is a lovely anime to watch. There is plenty of action, but the story is quite slow paced and never feels rushed and the animation is beautiful. There is heavy emphasis on character development and the relationships which form during the course of the story and the overall effect is a real feel-good experience. The soundtrack is also very good, sweeping classical pieces which set the scenes brilliantly.

Obviously aimed at the young female audience, this ticks all the boxes and I can’t wait for the next series.

“Colour has meaning and red is supposed to represent fate. You may not like it much now, but your red might lead you to something good when you least expect it.”

Snow White with the Red Hair is available to buy now on Blu-ray.