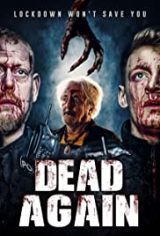 Greenway Entertainment, Rellik Films under the direction and writing talents of Steven M. Smith (Ghosts, Borstal, The Doll Master, Essex Boys: Law of Survival, The Haunting of Borley Rectory, Red Army Hooligans) they bring us a Big Trouble in Little Pitchfield. A quiet day you are not going to have.

Only the dead have seen the end of war, courage is knowing what not to fear.

Channel 13 blurts out World leaders telling people of the Global alien attack and the virus that is spreading through the populous. With 174,000 cases with the death toll rising about 7,000 Europe and the USA are shutdown.

Your vision is stained red as you watch runaway Judith (Primrose Bigwood, Scare Attraction) run from an unseen assailant into a boarded up large house where she seeks refuge in the dark derelict home. But that was a wrong move.

Sleepy, sleepy village of little Pitchfield has a working police station and PS Cooper (Tony Fadil, The Doll Master, 16/03, Invasion Earth) has spent his long career in this idyllic location. Today the new blood arrives to take over the reins in the guise of PC Brody (Elliot Cable, Escape from Auschwitz). 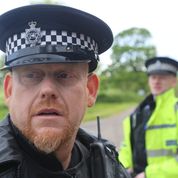 PS Cooper has a sense of humour, and he takes his obvious boredom out on the newbie with 1970’s film quotes and Brody keeps telling him he wasn’t born until the 1990’s. With the props removed Cooper offers to show Brody the sights of Little Pitchfield.

Meanwhile, somewhere else in the village posh goth girl Katie (Sonera Angel, The Haunting of Borley Rectory) and her friend Dan (Chris Monk) explore an old hospital for the criminally insane (romantic what) but during their stroll of the old gardens they here some blood-curdling screams.

Back with our intrepid police officers and Cooper is still telling Brody the life history of the village. 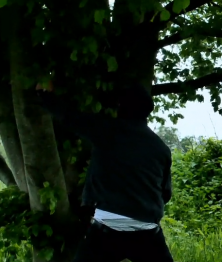 That’s when they come across Billy (Jimmy ‘The Bee’ Bennett, Where Thunder Reigns) which gives Brody for his first chance of enforcing the law as public urination is a public order offence. But Cooper knows only too well what Billy is like, and he waves him on his way.

“The peeing tree is four down on the left.”

But soon there is a commotion and everybody is heading to the derelict mansion where screams and shouts have been heard. It has also caught the ear of local greenhouse fanatic Bob (Mark Wingett, Quadrophenia, Snow White and the Huntsman, I Am Hooligan). Things are moving, and they are hungry, very hungry and it comes down to property owner Ellen (Kit Pascoe, Doll Cemetery) to rally the troops. 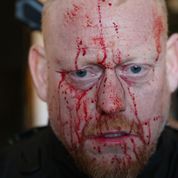 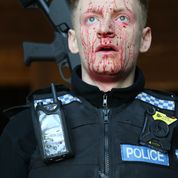 Once again Greenway Entertainment brings us another film packed with action, blood and comedy. Look out for this little shocker come Halloween time.