5 stars of triumph and heartbreak on the Grand Line. 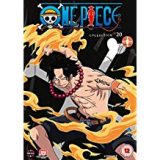 One Piece is a long running anime based on the serial in Weekly Shōnen Jump magazine written and illustrated by Eiichiro Oda and telling us of the adventures of Monkey D. Luffy and the rest of his crew, the “Straw Hat Pirates”. It is directed by Kônosuke Uda and produced by Toei Television Production (Dragonball Kai).

This collection comprises episodes 469 – 492. It continues and concludes the Marineford Arc and introduces the Post War Arc. The usual spoiler alert applies here, we’re well into the story so don’t read on if you’re planning to watch the previous installments.

“Why do any of them care? I deserve to die like this. Why can’t they see I’m not worth risking their lives for?” 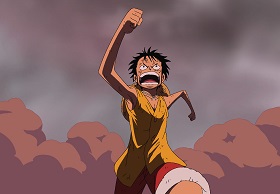 Luffy (Colleen Clinkenbeard – Brother’s Conflict, Fairy Tail) has arrived at Marineford and is crossing the bay in order to rescue his big brother Ace (Travis Willingham – Fullmetal Alchemist), due for execution at any moment. He is aided in his endeavors by many allies, some of whom are old enemies of his, united under the same cause.

With the help of Jinbe (Daniel Baugh), Crocodile (John Swasey – Yona of the Dawn) Boa Hancock (Lydia Mackay – Good Luck Girl!) and many others he gradually makes his way to the scaffold.

Watched by the people of the Sabaody Archipelago, Ace’s commander and feared pirate Whitebeard a.k.a. Edward Newgate (R. Bruce Elliott – Black Butler: Book of Circus) and his numerous associates continue their epic battle with marines. 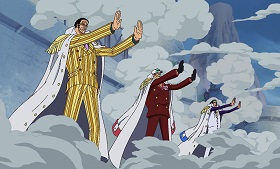 However the admirals, Aokiji (Jason Douglas – Jormungand), Akainu (Andrew Love – Haikyuu!), Kizaru (Ray Hurd – Tokyo ESP) and Sengoku (Ed Blaylock – Case Closed) are a formidable force and coupled with the seven warlords of the sea it is inevitable that not everyone who steps onto this battlefield will make it out alive.

Things are made even more difficult with the surprise arrival of Marshall. D. Teach a.k.a. Blackbeard and his new crew.

This is a classic One Piece arc, action packed and as is often the case you will need tissues at the ready, as there are some stunning revelations and quite significant losses involved. Colourful, gripping and well written as ever this is an absolute most own for fans of this brilliant franchise.

“That’s my little brother you’re trying to murder. I’ll have to ask you to stop.”

One Piece (Uncut) Collection 20 is available to buy now on DVD.