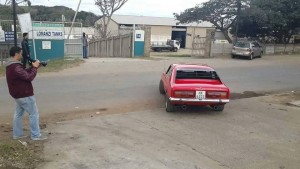 Q8 What are your aspirations for The Bush Knife?

Well my main goal is to complete it first. Lol. Then to release it world wide so that my cast and crew can be recognised internationally instead of just here in SA. But using this film I would love my actors to benefit greatly from the profits so that they can do a lot more for their families instead of getting paid low incomes as some of the directors do.

Q9 Where did the story of The Bush Knife come from?

Hahahahah. That’s hard to explain. I thought of a normal man who has a family. Who has lost everything and is pushed so much that only he can take vengeance upon those who murdered his family. So I would say from watching films like Machete, the punisher and of course my classic favourite Mortal Kombat.

Q10 Where would you like to see yourself in 5 years time?

Well, as a striving international film company. Giving new comer Directors and actors a chance to break out in the industry. 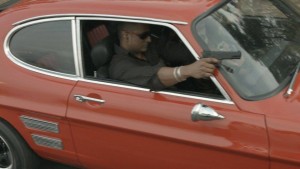 Q11 What is Bravospan Productions?

Bravospan Productions is my film company. I’m the CEO and director of it. It’s not only a film company but also a series and online content through my sub company Bsn Online.

Q12 If you had a big budget what would you do with it?

Make the film I’ve always wanted to do. As I am a big fan of the game. I would create a MegaMan movie that is out of this world.

Q13 If you had the chance to do a Hollywood title, which one would you choose?

I would love to direct the Power Rangers.

Q14 What film or series would you like to get a reboot and why?

Actually I would love to see a reboot of Mario Brothers. The reason been is that when they did the film many years back, it never really portrayed the characters as the game showed us. So yeah your Princess is in another castle.

Thanks for your time and energy Renaldo.