Now onto the main cast. 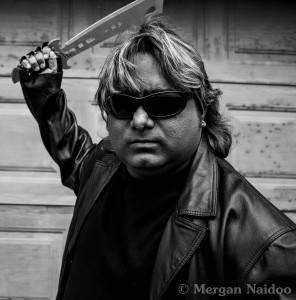 Q1 How did you and Director Renaldo Kell get together?

Funny we have been buddies on facebook for a while now but really started talking film business last year. I had a concept about Bushknife.
Renaldo believed in me and loved the idea and I am grateful we have an amazing project.The first of many of our collaborations.

Q2 What is the main thing that you want to get across with The Bush Knife?

I would love global recognition. It is a unique South African story. A hero if I might say, far removed from the political struggle stories that we have become
accustomed to of late. I sincerely hope it’s commercially successful as well.

Q3 What are the difficulties/benefits of being the star of an indie film as well as being the producer?

The difficulties, much more responsibilities. The nitty gritty of logistics. Being more of a leader  and make sure every crew and cast member are happy.
Then there is having to live the character Bush Knife. Its very method. You have to be in the moment for every scene.The benefits, much more creative
control and freedom which allows you to stretch your creative boundaries.That being said there is no place for being egoistic. 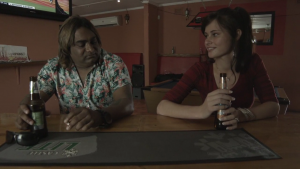 Q4 How do you survive the gruelling filming regime?

Talk about gruelling. I dislocated my right knee and tore ligaments. I just kept quiet about it and filmed my final fight scene. Only when we wrapped did everyone on set realise the severity of my injury. I guess it is my burning desire to act and give of my best keeps me going.

Q5 What do you to achieve with The Bush Knife?

I hope Bush Knife becomes a franchise and a global concept.

Q6 What is the future for indie films in South Africa?

There are lots of wonderful stories, ideas, actors but we need to be taken more seriously.We need more investors,
workshops to be in place