New director David Leitch (Atomic Blonde, Deadpool 2) was given a mega budget film ($200,000,000 (estimated)) and he blew the lot (almost literally). With Chris Morgan (The Fast and the Furious: Tokyo Drift, 47 Ronin, Fast & Furious 9) at the writing helm you know Hobbs and Shaw comes with a full pedigree certificate for the Fast and Furious action that is about to hit your home screen. Hobbs & Shaw features over 80 minutes of never-before-seen bonus content including an alternate opening, deleted and extended scenes and several featurettes with the film-makers and cast that take fans further into the thrilling story.

It’s dark in London and some terrorists are moving a dangerous consignment which Hattie Shaw (Vanessa Kirby, The Necessary Death of Charlie Countryman, Jupiter Ascending, The Crown) and her team of MI6 operatives are desperately trying to retrieve, the programmable supervirus dubbed “Snowflake” from terrorist organization Eteon. Things are going well for Hattie and her crew until Eteon (Eteon believe in that humans should evolve through technology within the body as well their hi-tech weapons

etc.) super-operative Brixton (Idris Elba, The Dark Tower, Bastille Day, Pacific Rim) arrives and kills all Hatties team as she tries to get hold of the CT17 virus.

Things are looking desperate for Hattie and she takes her only option, she injects the virus into herself and makes her escape. Brixton thinks fast and frames Hattie for killing her team and stealing the virus. Now she is wanted and needs to be found.

In the UK Deckard Shaw (Jason Statham, Mechanic Resurrection, Parker, Crank, The Transporter) is visiting his mother Queenie (Helen Mirren, Woman In Gold, The Long Good Friday, Red, The Queen) who moans at him for becoming estranged from his sister Hattie. Meanwhile in Los Angeles Luke Hobbs (Dwayne Johnson, San Andreas 3D, Baywatch, Central Intelligence, Race to Witch Mountain) is having lunch with his daughter 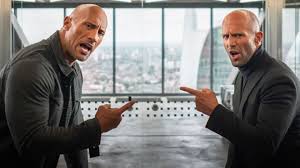 Samantha (Eliana Sua) who for a school project is researching the Hobbs family tree and she asks her father about a photo she found in the garage, it’s a photo of his brother. (All the background being sorted.)

Things change for Hobbs and Shaw when they find out about Snowflake and Hattie and they are forced to work with one another to find Hattie and retrieve the TC 17 from her blood stream before the world is ruined.

Fast and Furious: Hobbs and Shaw is a Blast. With Johnson’s comedy timing and Statham’s stoic violent demeanour, you know there are going to be sparks.

A great way to spend an evening over and over again.

Fast and Furious: Hobbs and Shaw is available on 4K, Blu-ray and DVD