Who Gives a Pluck?

Eureka Classics lives up to its name with this jiangshi action adventure. Mr Vampire started a trend in the late 1980’s early 90’s. Produced by the legendary Sammo Hung (Three Films With Sammo Hung, Wheels on Meals, Zu Warriors From the Magic Mountain, The Fate of Lee Khan, Jackie Chan’s PROJECT A & PROJECT A PART II) who knows his way around martial arts films and with direction from writer/director Ricky Lau (Two Toothless Tigers, The Romance of the Vampires, Mr. Zombie) they create a genre of comedy spiritual films. Brilliant stuff. 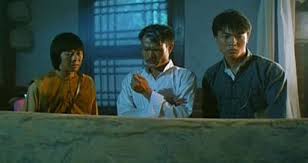 students Chou Sheng (Siu-Ho Chin, Vampire Warriors, Let’s Go!) who works in a boutique when not with his master and the lazy Man Choi (Ricky Hui, Mr. Coconut, All’s Well, Ends Well Too) who resides at Master Kau’s large residency.

Children shouldn’t interrupt adults when they are talking.

At this time China is being influenced by Western culture and Master Kau and Choi have the opportunity to take western tea with a wealthy businessman Mr Yam (Ha Huang, Last Hurrah for Chivalry, Drunken Master) but these guys 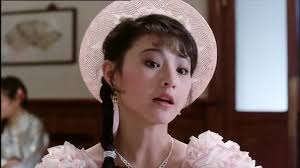 know nothing of Western culture so this turns out to be an adventure especially when Yam’s daughter Ting-Ting (Moon Lee (as Choi-fung Li), Kick Boxer’s Tears, Angel Terminators II) turns up. But back to business, Yam wants his father to remove Yam’s deceased father from his grave and rebury him in the hopes of bringing more prosperity to the Yam family.

During the ritual removal of the coffin Kau notices that the body that has been buried for twenty years still looks rather juicy, and he suggests to Yam that the 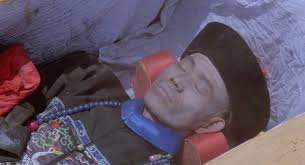 casket should be moved to Kau’s house until the right ceremony can be conducted. Kau tells Choi and Sheng that he fears that father Yam is a vampire and that they should stop the body from rising by covering the casket with magic lines (Plucks) to stop the vampire from emerging and wreaking havoc.

Whoa! Its put on weight, too! 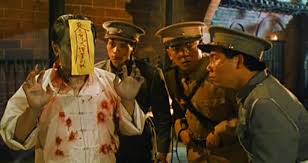 so the hilarity begins with hopping vampires that are hard to stop unless you are properly trained in Taoist traditions.

Throw the alluring ghost Jade (Wong Siu-fung, New Mr. Vampire, The Missed Date) into the mix and Master Kau and everybody including the cowardly police i 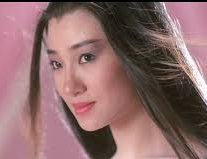 nspector Wai (Billy Lau, Eastern Condors, Police Story 2) have their work cut out to save the day.

Either I’m dreaming… or I just met a ghost.

Mr Vampire is just one of those films you watch agog, eagerly awaiting what madcap thing will turn up next. Filled with lots of martial arts and gymnastic feats which makes this a must-watch film and definitely a great start to a genre.

Mr Vampire is available on Blu-ray