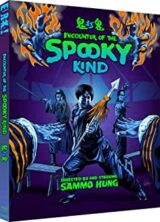 From actor/director Sammo Hung (Three Films With Sammo Hung, Wheels on Meals, Zu Warriors From the Magic Mountain, The Fate of Lee Khan, Jackie Chan’s PROJECT A & PROJECT A PART II) and the producer of the jiangshi film genre (The jiangshi is a corpse reanimated by a Taoist priest) that he created along with writer Ying Wong (Black Lizard) Mr Vampire.

Bold (Sammy) Cheung (Sammo Hung) is a tough man, or so he believes until he meets two wine jugs with spirits inside them, who want to swap places with the living. He fights for his life as they start to take chunks out of him, that’s when he wakes up and

startles his wife (Suet-Mei Leung, The Dead and the Deadly) who chastises him for his repeated nightmares.

Sammy notices that his wife has a new red top, which is surprising since she doesn’t work, and he doesn’t earn that much to give her, her housekeeping money.

Sammy works for Master Tam (Ha Huang, Twinkle Twinkle Lucky Stars, Drunken Master) as his courier/taxi service and each day he takes the wealthy man to Mr Lau’s (Tai-Bo, Police Story, Project A 2) place for his lunch etc. While he awaits his master he is challenged by fellow cabbies to stay in a haunted house for the night due to his prowess of being a man hard to scare, (shhh, it’s a setup).

Suffice to say, our favourite Kung Fu master survives the encounter, but he doesn’t learn as he is a sucker for a bet to prove his bravery. Whilst waiting for Master Tam he is having some tofu when the vendor tells the tale of a philandering wife which puts a suggestion into his head and his wife’s new red attire. This takes him home and he finds two peeping toms peering through the crack in his front door.

They are really going for it.

The noise he makes warns those who are inside and when he barges in there is only his wife and an unidentified slipper, but she makes such a fuss that he is forced to withdraw.

The owner of the shoe does not want to be discovered, so they go to a Taoist monk Priest Chin Hoi (Lung Chan, The Dead and the Deadly, Iron Fisted Monk) who is willing to take the job and remove Sammy from the picture. Hoi’s apprentice Priest Tsui (Fat Chung, The Magnificent Butcher, Mr. Vampire II) gets word of this and tells

Hoi that they are not supposed to cause harm, and they fall out, and he leaves to warn Sammy who has once again accepted a bet to stay the night in an abandoned temple.

Now the hilarity is ramped up, and we see Hung’s comic timing in his Kung Fu, and we encounter our first jiangshi in this history making genre creating film. And the best way into a genre is to start at the beginning. Great fun.

Encounter of the Spooky Kind is available on Blu-ray